I need a boat. The end of the summer has found me fixating on the turtles of Philadelphia's Schuylkill River, but I've been struck by how inaccessible they are. Of course all aquatic turtles are somewhat inaccessible. They have a good trick - jumping in the water and either swimming away or hiding at the bottom, so that you have to engage them in their element (of course I enjoy the water almost as much as they do, so I'll keep trying). Most of the Schuylkill below the fall line (at the falls at the Waterworks) is lined by industrial land, and above the fall line it's a mix of industrial and Fairmont Park, which bans swimming from its territory.

Now the ban on swimming bothers me less than the exposure to my fellow Philadelphians. Herpers are secretive by nature. Partly we gain a severe wariness to other herpers seeing what we're doing, lest they poach the species we care about or otherwise ruin a site (say by flipping cover objects and not putting them back, or harassing rattlers excessively so that they abandon a basking perch); we get tired of people asking about what we're doing, say when we're looking under rocks in a creek. I don't think the cops are going to spot me in the river where I'm going, but I wouldn't put it past my neighbors to assume I'm drowning (a stealthy drift downstream towards a basking turtle could look like a lifeless drift downstream) and call more attention to what I'm doing.

So the first time I jumped into the Schuylkill, this particular time for a recreational/exercise swim, I went during the work week at morning rush hour, when the usual stream of recreational walkers and bikers wouldn't be there to ogle (See the back page here for an article I wrote about it in Grid). Scott was with me as a spotter, and as I climbed out he pointed to a turtle which had just emerged to bask on the other side of the river. I had to get to work.

I rode my bike up to a nice jump-in point on Labor Day but got spooked. I felt a little wimpy, but with all the passers by, and with all the people stopping for scenic contemplation right where I'd be in view, my herper shyness got the better of me.

Here are some shots of the turtles and the spot. Here's the river with the thumbtack on a basking spot for a male map turtle (Graptemys geographica) who tempts me from beneath the Falls Bridge.

When I took a photo of the turtle, I didn't realize I had it set to underwater. I apologize for the weird effects of trying to bring some definition to the slight bump in the glare off the log. 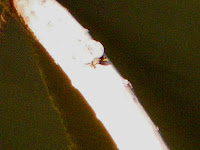 A bunch of turtles, mostly red-eared sliders (Trachemys scripta, the others what I will term "mystery turtles" since they could have been red-belly turtles - Pseudemys rubriventris) were enjoying a snag just downstream. 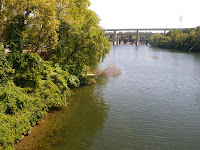 I used the ride home for plotting. I would return a little later that week when fewer people would be wandering by and none would notice the dude splashing around in the river, and then I would catch those turtles!

As Scott put it when I called him for a bit of a pep talk, "You know you want a shot of you holding a map turtle with the bridge in the background," but I thought I'd give those sliders a try first.

The water wasn't particularly cold, but I still felt that flashing gasp of panic as I pushed out from the bank and looked down at the bottom dropping away. There is something elemental about realizing that I'm quite literally in over my head - not that I could drown, but more the sense that I could fall, as if I were flying over the ground and at some sudden but unpredictable moment the magic power could fail.

The current was moving slowly, but I stroked to gain speed as I passed under the bridge. I assumed that the sliders on the downstream snag would dive in, but I also assumed that I could easily find them on the bottom. I was wrong. I suppose I could have looked harder, but at what point does one stop diving underwater and peering around the debris 10+ feet below the surface of the Schuylkill? I will look harder next time.

Next I went for the map turtle. I swam upstream to the shadow of the bridge, and then worked along the shadow until I could see the turtle. This is the frustrating part. Single basking turtles are a little slower to jump into the water than turtles in groups (one skittish turtle spooks all the rest) and this one let me get just close enough that I thought I could get close enough.

Of course it dove with me far enough out that I couldn't see exactly where it went. I dropped down to the base of the pylon, assuming that's where the turtle was hiding. Unfortunately the bottom there is littered with soccer-ball sized rocks or concrete chunks (hard to tell down there), providing myriad hiding places for a turtle the size of a salad plate. Nonetheless I searched, repeatedly diving and checking, diving and checking again, repeating, etc. until I gave up.

Again I plotted on the ride home. I also took photos of some more mystery turtles downstream:

...back to the plotting. I have a pair of flippers I'd like to use on the next trip. There are two key but unknown distances in this plot: First is the distance underwater that I can swim with flippers on (I will work on determining this distance in the pool). The second distance is how far away I can see a swimming map turtle underwater given good water clarity. The idea is to drift downstream quietly, dive at the first distance, surface for a breath close enough to the turtle so that when it dives and I dive after it, I can see where it goes.

Today I was riding back from my parents apartment in Center City by a somewhat roundabout route. I had wanted to see if I could spot the outlet of West Philadelphia's underground Mill Creek (see Philly H2O for more on our underground waterways) but quickly noticed some basking turtles, holding onto their logs even as they bobbed on the wakes of passing boats.

The bridge I was on, Gray's Ferry, is the one crossing the river pretty much east-to-west below.

Here's a view to the northeast, upstream. You can see the Center City skyline in the middle, and the hospitals of University City (across the river from Center City, though the river is hidden by the bend) to the left. 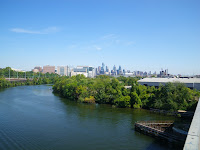 Here's a shot of the bridge itself. Not the most peaceful place to observe turtles. 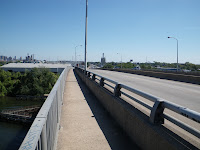 See them? Even with binoculars I couldn't figure out the species. 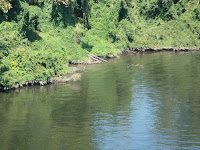 What about that boat I mentioned at the beginning? I am convinced, in an impractical kind of way, that a boat would solve all my problems. I could put in wherever (I guess either above or below the falls, depending on my destination), and get closer to the turtles than I can now to at least see what they are - these at Gray's Ferry were quite tolerant of nearby watercraft. I could tie up wherever I wanted and jump in, bank property owners be damned, and Fairmont Park too; by an interesting twist of the law, Fairmont Park's swimming rule doesn't apply to the water itself, so that you can go swimming from boats.

For more on urban Philadelphia boating check out Dubside's website.