I have been following the news about the fire in the near Warren Grove, and I’m keen to get out there. I have some spots I like to visit that I’m pretty sure were smack in the middle of the burn; I’d like to see how they look now. I also am curious to see what herping is like in recently burned-over areas like that.

I’ve heard that the snakes have weathered the fire pretty well, but that the box turtles have not been so lucky. Snakes can get down into stump holes and other burrows and thus survive whatever the severity of the blaze as it passes over. Box turtles, though, can only get down a few inches into the sand or soil and hope for a light fire, the kind that just burns surface debris and small plants and leaves the trees intact and that is the most common in the Barrens. This fire was a relatively fierce blaze, however, and apparently has burned up even the fire-resistant pine trees in its path. For the box turtles this meant that they couldn’t get deep enough to survive the unusually intense heat.

I haven’t managed any big trips lately due to an illness and then recent death in the family, so not much else to write about right now. I did stop by my favorite brown snake lots, and I came up with three under concrete chunks on May 17th around 7:30pm (it was humid and just starting to rain). All of them were getting ready to shed their skins - you can tell by the milky look of their eyes and their overall dull appearance. 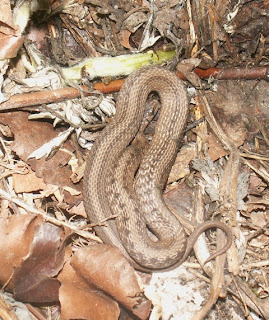 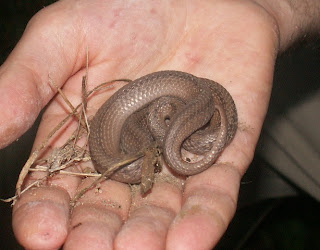 Posted by Bernard Brown at 8:18 AM No comments: