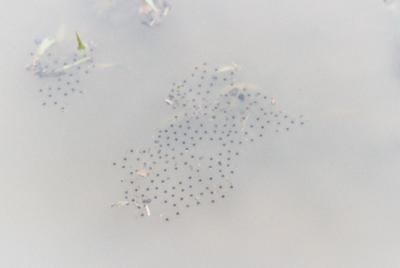 I have no new conquests to report today, but I’ve got pictures! These are all from my trip on July 2nd which I posted under “”. The first is pretty boring to look at, but interesting to think about. These are eggs of some kind of amphibian floating in a puddle. I think they are Fowler’s toad (bufo woodhousii fowleri) eggs. I have read that they lay them relatively late in the year, and these appearing at the beginning of July strike me as kind of late. I haven’t been back to check, but I hope to see lots of little black tadpoles swimming around in the puddle the next time I’m by there. Here is a shot of the dirt road in which I found the puddles. 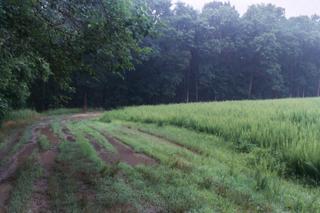 As you can see, this is edge habitat – woods on one side and a field on the other. There is a marshy stream about fifty yards off to the left. This is great because you have field species, woods species, and semi-aquatic species all in a relatively narrow band, as well as species that specialize in living in edge habitats, such as the white tail deer people come here to shoot. 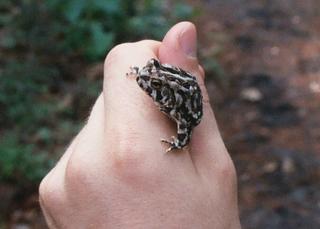 The next photo is of a cute little Fowler’s toad I caught in Wharton State Forest. I saw a couple of these, and I’m a great fan. They’re common, pretty, and easy to catch. Be warned that they will pee on you if you pick them up.

Here are a couple box turtle (Terrepene carolina carolina) pictures. I was surprised to find this girl on the trail, but in retrospect the recent rains made for good box turtle weather. As you can see, she was very active in the hand. Most box turtles clam up as soon as they see you, but this one stuck everything out and posed for a very cute shot. Here is another picture of her making her getaway back into the underbrush. 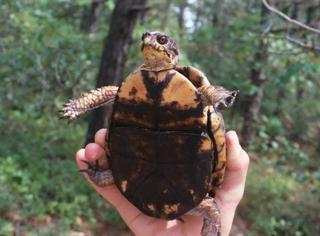 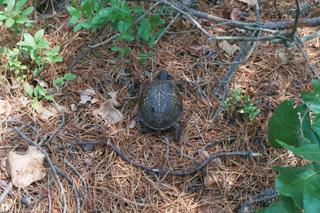 Posted by Bernard Brown at 5:43 PM No comments: