I don’t know Salem County, NJ very well at all, but last Saturday the 27th I decided to check out some ponds there for turtles I could swim after. This was stupid, since going somewhere new means I need to spend valuable herping time finding my way around. Even if I quickly figure out where I am, the place could be a total dud.

Salem County looks like the garden in the Garden State. Satellite images show a tight patchwork of fields for growing soy, corn, and vegetables. I passed some cow pastures too, all making for a strong contrast to the woods and wetlands I’m used to in the Pine Barrens. It’s actually pretty boring for me on the ground. I'm not looking for peppers or Herefords; I’m looking for turtles and other herps.

Looks were deceiving, however. I was casing the area around the first pond when I spotted a snake stretched out across the dirt road. I slammed on the brakes and jumped out. I took a quick photo as I got out of the car. 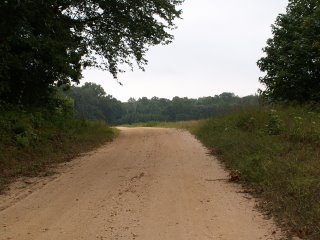 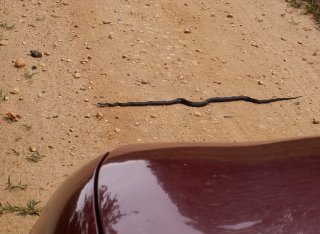 It was a black rat snake (Elaphe o. obsoleta). I took pictures of him stretched out and frozen, but he snapped into a defensive pose as soon as I touched him. 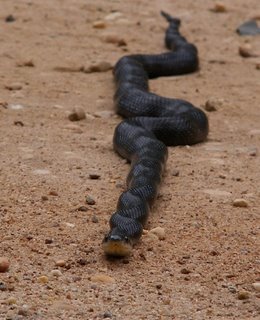 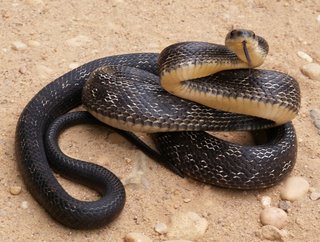 He did not like the camera. I gently picked him up, and he seemed quite at home on my arm: no musking and no biting. As soon as I pointed the camera at him, though, he pulled his head back and I felt his tail twitching back and forth (that creates a rattling noise against leaf litter). 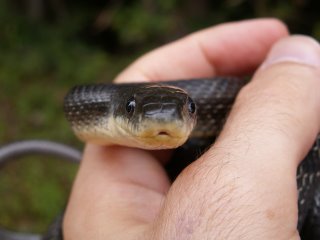 I let him go and eventually parked to walk around the pond. I surprised a few frogs for the ever-frustrating unidentifiable hops and splashes: something moves out of the corner of your eye and hits the water. You know it’s a frog, but you didn’t see what kind. After six of seven of these I was able to get enough of a look at one to identify it as a green frog (Rana clamitans melanota). I saw one painted turtle (Chrysemys s. scripta) as well, but I also saw plenty of people casting lines into the water.

I ended up getting stage fright. It’s one thing to explain a routine herping activity like chasing after frogs or looking under logs, but another to look at a total stranger performing a completely normal activity (fishing) and explain why I’m doing something as untested and ridiculous-looking as swimming after turtles.

I saw another snake on a paved road near the town of Salem, and I pulled a quick U turn to check it out. This five-foot beast of a black rat snake was thoroughly dead, though, so I took no pictures and continued on my way.

DOR herps are always heartbreakers, but the disgust and sadness were mitigated somewhat by yet another black rat snake I dodged another twenty miles or so into my travels. I missed its head (thank God), and jumped out. It was alive! I grabbed it as it was heading into the grass at the side of the road. This one was also pretty calm and did not bite either, but it musked on me, a smell which stuck to me the rest of the trip (a good thing – remember, musk is the smell of success!). Here he is with a picture of the road on which I found him: 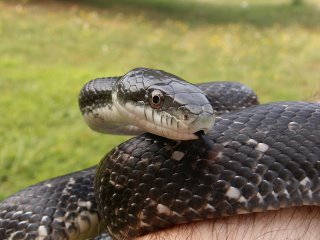 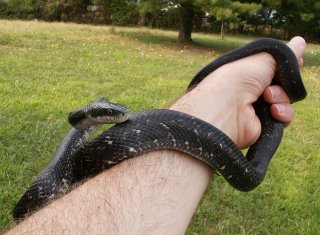 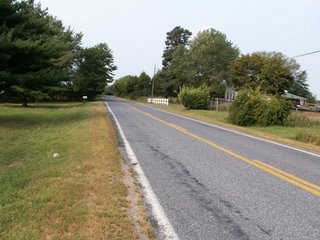 Of course the emotional trajectory changed again with the next DOR black rat snake and a DOR rough green snake (Opheodrys aestivus).

What was up with Salem County? It had rained the night before, but was that enough to bring out all the snakes? Do I need to spend more time road cruising there? Is this a sign from the herping gods to forget about turtles and just focus on the snakes?

The second pond seemed like a good spot. I saw no other parked cars when I parked mine, and I hopped down to check out a pool at the base of the dam on the pond. 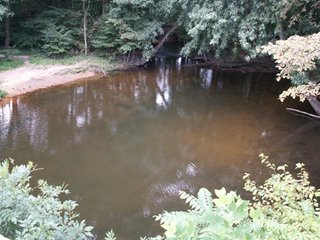 What was that on the concrete chunks at the shore? A basking stinkpot (Sternotherus oderatus)? 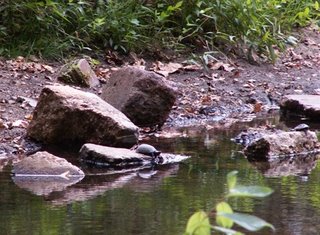 It’s not every day I see a stinkpot basking like that, and I quickly made the decision to jump into the water and head it off before it could get too far into the pool. I put down the camera and charged into the shallows.

Redbelly turtles (Pseudemys rubriventris) and painted turtles see you and they’re in the water before you can move. This stinkpot looked at me for a second and sort of took a step. It kept looking for another second, and then it finally made up its mind to jump off into the water once I was splashing through the water in its direction.

Even with all that delay, I failed completely. I was still ten yards or so away when he got into the water, and the little guy made it under a submerged pile of concrete chunks that I couldn’t excavate.

Feeling pretty defeated, I waded out into the pool about waist-deep and looked around. I could see the fuzzy shapes of fish swimming calmly around me – some bluegills I think, some carp, and a huge largemouth bass I would have been ecstatic to catch back when I used to fish. I strapped on my goggles and bent over to immerse my face. Looking down at my feet, I could make out two vague white shapes, certainly my sneakers, but that’s about as much as I could make out.

The murkiness of the water made me a little suspicious of it, and I didn’t think I’d be able to see turtles too well anyhow, so I hesitated to dive in. I was tempted when a turtle (either a redbelly or a red-eared slider – Trachemys scripta elegans) surfaced a few feet away. He watched me while I tried to make up my mind, and then he dove again. The same thing happened with another, smaller stinkpot before I gave up and got out of the water.

My suspicions about the water quality were confirmed when I walked around to see the main portion of the pond. Here’s how it looked: 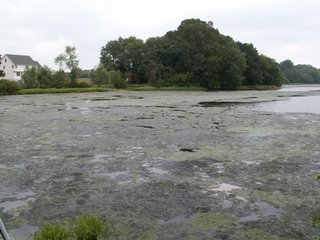 All that scummy-looking algae is a sign of high nutrient levels. That’s another way of saying there’s a lot of fertilizer in the water. Fertilizer is unpleasant to think about bathing in no matter how it is produced. Had I been splashing around in a brew of petrochemicals or manure?

So, my task for next week is to check out some ponds I’ve driven past or walked around before and hope they’re clean and isolated. Wish me luck.

The temperatures rose from the high 60s to the high 70s on Saturday morning and early afternoon.