One of Philadelphia’s biggest herpetological shortcomings is that it doesn’t have many lizards. There are five-lined skinks (Eumeces fasciatus) and fence lizards (Sceloporus undulates hyacinthus) in the area, but I haven’t actually seen any lizards outside of the Pine Barrens.

We particularly lack active lizards that do all their business out in the open, like the anoles (Anolis and Norops species) of the Southeast and those Tropidurus torquatus we saw so many of in Brazil. It’s fun to spot lizards basking on fence posts as you walk to work, and it’s always a kick to watch the males doing head bobs and pushups to impress the females, fun that Philadelphians miss out on. Maybe that’s why Philadelphians are known for being so ill-tempered; does lizardlessness breed crankiness?

I might or might not be onto the next great breakthrough in psychology, but either way I had a great time visiting the Italian wall lizards (Podarcis sicula) of the Bronx Botanical Gardens on Saturday (August 5th).

I headed out from my sister’s place on the Lower East Side and took the D train up to the Botanical Gardens. I got there a little after they opened at 10am (admission is free 10am to 12pm Saturdays). I made my way directly to the rock garden, and there the kid at the admissions booth gave me directions to where I was most likely to see the lizards. 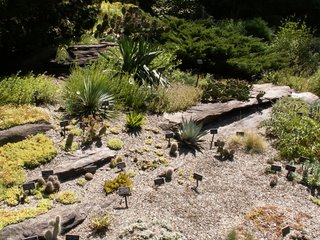 I walked back and forth for maybe fifteen minutes and saw absolutely nothing (and imagine my frustration at being surrounded by all those rocks I couldn’t look under!). To all casual observers I must have looked like a serious rock garden enthusiast, staring at all the little clumps of grasses and succulents from around the world with an intense, studious frown.

Of course that was a frown of frustration, but I reminded myself that it’s so often like this with spotting lizards. You don’t see any at first. You stare and stare at every pebble and leaf, wondering where they all are. Are they all sleeping? Is this the wrong spot? Have you scared them all into hiding?

Suddenly, though, you see one out of the corner of your eye. You turn to look at it, and just as suddenly it’s gone. Then you turn your head and see another, then another, and then you realize they’re all over the place. Maybe it’s a question of them all coming out at once, and maybe it’s that your brain needs the first to know what how to recognize all the others, but that’s how it is with lizards: you see one, then you see them all.

I had not chosen this spot at random, but at the advice of Russell Burke, a biologist at Hofstra who has studied the transplanted Italian wall lizards of Long Island and the Bronx. I had initially sought out Dr. Burke for information of the wall lizards of West Philadelphia.

Wall lizards of West Philadelphia? Surely I would have written about them by now, right? Well, while there once was (in the mid-1900s) a population of Italian wall lizards near the zoo along the railroad tracks towards Market Street, that population has gone extinct.

Some guy may tell you his friend says he knows a guy who found one once, or they overheard a guy talking at the Hamburg reptile show about them still running around the city, but it’s all urban herping myth. One person says “there used to be wall lizards in West Philly,” and, as in a game of telephone, a few iterations later you’ve got a fourth-hand account of them having been found there last Tuesday.

Dr. Burke, as well as several other professional and amateur herpers (while all recognizing the difficulty of definitively proving the absence of a small animal) have reported seeing no wall lizards after many hours of searching and have heard no first-hand reports from other herpers or neighborhood residents. These are active, highly visible lizards, and if no one in the neighborhood has seen them and experts who have spent hours upon hours observing them elsewhere haven't either, they’re not there.

So, with no hope of seeing the Italian wall lizards in West Philly, I had traveled to a place they do live. After fifteen minutes of pacing and frowning, I finally caught my glimpse. Something green dashed off the path as soon as I saw it. I paced a little more slowly and more intently at that point, and after another minute I saw a much smaller lizard dash from plant to plant, each time running just as I was about to take its picture.

A few more minutes of pacing, and then I saw an adult slowly crawling around the rocks. Here it is. 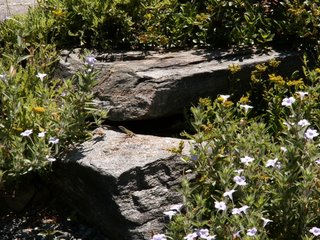 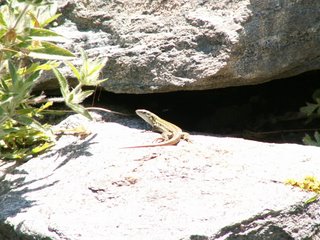 After that it got easy. Here’s a particularly nice one I saw a minute later and a few yards away. 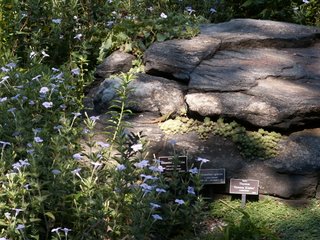 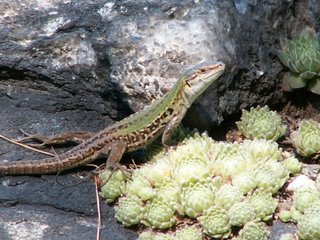 At that point my camera batteries died. I was a little miffed, but I had a few pictures, so I had accomplished that part of the mission. I kept walking slowly back and forth. I saw more adults slinking around. One seemed to be following another, keeping about one foot behind. Another ran away from me and into a large clump of grass, only to run right back out towards me, pursued by a slightly larger neighbor.

More people were showing up in the rock garden at that point, and I only put in a few more minutes of lizard watching. I said arrivederci and headed back to the subway station.

The temperatures were in the high 70s and it was sunny.

Here is a link to more information about the Italian wall lizards: