Back in the May a few of us went on a spotted turtle (Clemmys guttata) trip to one of our traditional spotted turtle sites. This is a place I don't think I ever would have found if other herpers hadn't told me about it - nothing from the road indicates that the woods way back there are worth inspecting, and even once you're in the woods you sometimes don't notice the vernal pools and wetlands until you're right on top of them.
I'm going to remain extremely vague about the locale and even about my companions, but the pictures are fun, and at the beginning of 2009, when it's freezing outside and shows no sign of warming any time soon, we need a jolt of good herp vibes to keep us all from picking up and moving to Miami.

We caught a bunch of turtles, and the weather didn't even fully cooperate (sunny to start, but it clouded up about halfway through), which implies we could have found a lot more in better conditions.

Here's one of the stars of the show, a spotted turtle. We found seven basking in one spot at the shore of a vernal pool, and here's a shot of one of us corralling them for photos. 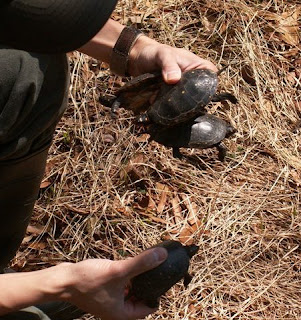 Now there's nothing wrong with a mud turtle (Kinosternum subrubrum), but they're just not as cute, or as pretty, or as rare, or as charismatic, or as photogenic... as the spotted turtles. We found several of muds as well, and here's one of the frumpy little guys. 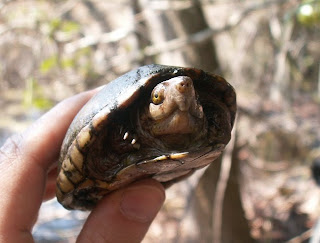 We looked under a lot of logs. Some day we'll find something more interesting under one of those logs than a redback salamander (Plethodon cinereus), but until then, here's the under-log stars of the day. 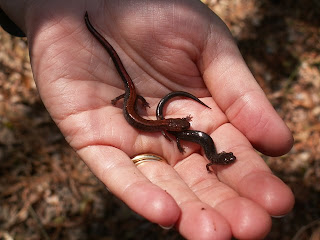 This site is also crawling with box turtles (Terrapene carolina). They tend not to come out as much in the cooler weather as the spotted turtles, but if you look around you can find them half-buried in the leaf litter, basking in the sun but visible only from just the right angle. 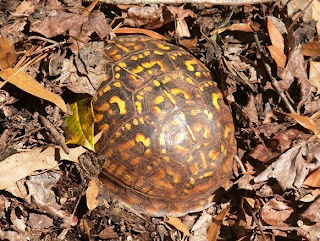 There are snakes there too, in fact lots of ribbon snakes (Thamnophis sauritus), of which I realize I probably should have taken a better photo, now that I look at this one. 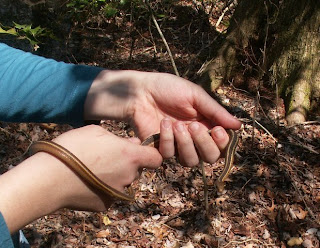 This will probably be one of our first spots this spring, sometime after the spotted salamanders breed in early March, but if everything goes according to plan, I actually might not make it back. There are three or four other places I'd like to find spotted turtles, so someday instead of the "spotted turtle spot" I'll be writing about the "spotted turtle circuit." Wish me luck.

Posted by Bernard Brown at 10:16 AM No comments: