Last night I had a wonderful time helping American toads (Bufo americanus) cross the road... in Philadelphia. A year ago I never would have imagined that volunteers working with the city could shut down traffic on streets around the Roxborough Reservoir to protect migrating toads, but I'm delighted to see that they pulled it off.
These folks deserve a lot of credit. Public Eye, led by Lisa Levinson (I've known Lisa for a long time, and I can't think of anyone with more energy or a bigger heart), works at the heart of the project. They've collaborated with people living around the reservoir to lobby the city and organize the effort, complete with toad counters, toad crossing guards (my official volunteer position), and people to staff the road blocks. We had Dave Cellini - one of the toad neighbors - come talk to the herp society (now officially the "Delaware Valley Herpetological Society") and I think we were all impressed with Dave's passion for protecting our local wildlife.
I bet you're thinking of a dumb joke that starts, "Why did the toad cross the road?" Sure they're trying to get to the other side, but the real reason is sex. Like many other amphibians, American toads breed once per year in big, loud, lusty aggregations - we might call them orgies if we weren't being scientific about it.

The problem is that roads surround the reservoir, so the toads have to face down cars and trucks to make it from their woods and backyard homes to the water. Here's a Google satellite image of the area for reference: 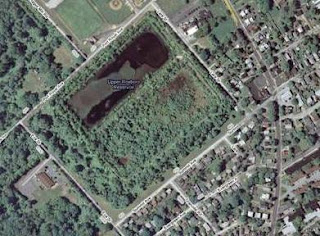 Here's a shot of one of the fearless little guys. 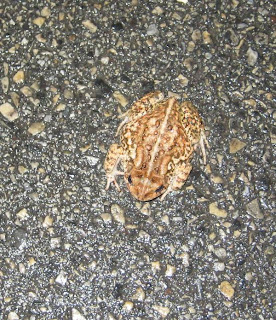 I'd like to say we were completely successful, but I saw three or four DORs. Here's one of the casualties: 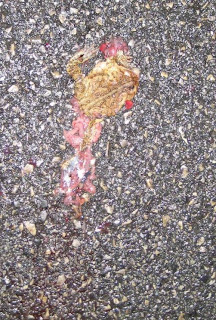 Here are two that successfully made it across. Toads make cute little chirps when they want to be released - this applies to toads we pick up but also toads that get grabbed by other toads against their will. Male toads are full of lust and not noted for their intelligence - they've been documented attempting to mate with all kinds of outlandish things, from boots to tennis balls, and even roadkill toads - so it helps for one male toad to tell another male toad to let go so that they both can pursue females unencumbered. I heard just such a chirp from the side of the road, where I spotted one hopping closely after another. 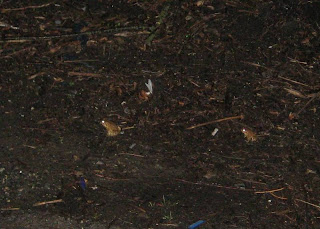 Toads weren't the only ones partying that night. We spotted this pickerel frog (Rana palustris) making the same trip (sorry for the off-kilter photo. They keep loading like this, dammit Blogger). 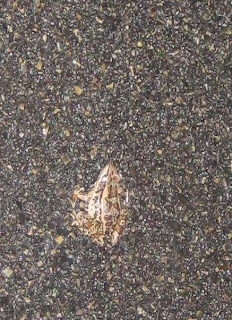