Number nine is up and live on Worm Salad. Have a great time reading, and if you're a herp blogger (or any kind of nature blogger) come on out and forward one of your posts for number 10.
Posted by Bernard Brown at 1:37 PM No comments:


The red belly turtle (Pseudemys rubriventris) was watching me. I guess I can't say what its eyes were focusing on, but there was its black head poking out of the flat, morning water of the reservoir.

I was not going to catch that turtle, not only because it had a whole lake to escape into, but I wasn't going to jump in; my plans that morning were to work the pool of water at the spillway, below the dam.

For a few minutes I watched the spillway, looking for turtle (big, round, redbelly turtle) shapes either basking or swimming around.

This is what I saw: 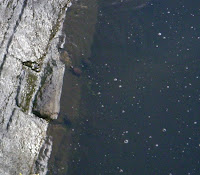 Those little guys weren't redbellies; they were my old friends, stinkpots (Sternotherus oderatus), a.k.a. musk turtles. Stinkpots (named for the acrid smell from musk glands at the bridge of their shell) I repressed the urge to sprint down, crash through the purple loosestrife, multiflora rose, and other thickly packed vegetation. I need to do better at calm observation. Two stayed mostly still where a thin sheet of water hit the spillway pool for a minute. One of them turned around and walked along the bottom to deeper water. Meanwhile the third smaller turtle left its post at the dam wall, swam to the other, and made nose-to-nose contact.

Down below I had some hacking to do, but I got down to the pool and picked targets. 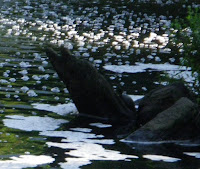 The sun was in the wrong place for the above photo to work well, but if you look at the crux of the rock sticking out of the water you can make out the round shell of a turtle, what I think was a half-grown redbelly. A stinkpot was hanging out towards the tip (stinkpots are known to climb way up and out of the water on branches overhanging water) but dropped off before I could take the photo.

Another stinkpot (I think one of the three) plodded up to the base of the dam again. This one made for a spot with stronger flow off the wall and seemed to try to walk up into it but stumbled back a little. It paused and then walked parallel to the wall. This is when I made the short charge, reached down under the water and picked up the turtle. 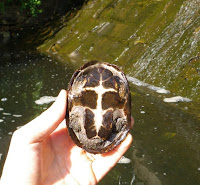 Note the big tail - this one is a male. 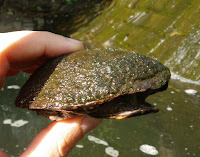 No one could call a stinkpot beautiful. I like to call them endearingly ugly. This one wouldn't come out of its shell out of the water, so I took advantage of my immersible camera and got a photo of him outside his shell. 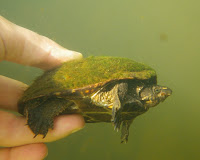 I never got the redbelly. I snorkeled up and back in the pool, groping around the rocks and kicking up a whole lot of silt.

On one glance up I spotted this head peeking over the edge. 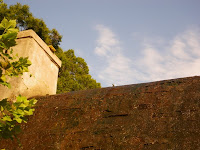 It's not every day you can get a shot of a basking turtle's head from below. In this shot you can make out the yellow pin-striping on the black head and neck.

In a few minutes the turtle settled down for a nice bask:

I saw no snakes, but I did see this water snake (Nerodia sipedon) shed. 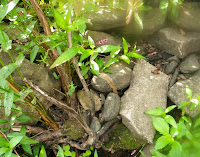 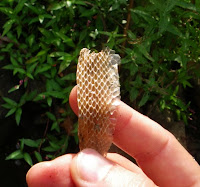 On the way home I wanted to stop by the Centennial Lake (an impressive title for a depressingly decrepit old lake, dating from Philadelphia's 1876 Centennial Exhibition), where earlier this spring I nearly caught a small snapper (Chelydra serpentina). I figure if I walk enough laps around that lake, I'll eventually catch that turtle. Short of that, maybe I'd see some turtle tracks in the mud. 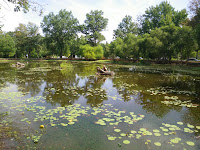 Lest I give too rosy an impression of the lake with these shots, here's a close up of the mud at the bank: 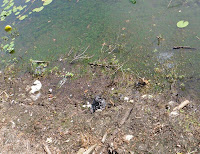 A dead deer added to the atmosphere - literally in this case, smelled before seen: 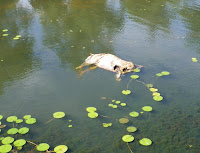 I had no luck with the snappers. Bullfrog after bullfrog leaped into the water as I walked around the lake.

Here's a shot with both grownup bullfrog and tadpoles: 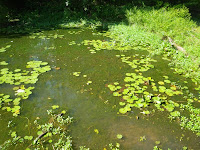 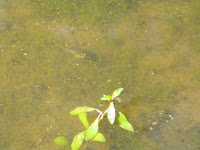 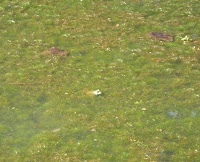 I did see one turtle. This one was one of the omnipresent red-eared sliders (Trachemys scripta), a non-native (to our region at least; they're from the middle part of our country) species popular as pets and commonly dumped into our lakes, rivers, and ponds. 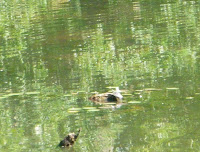 Posted by Bernard Brown at 6:52 PM No comments: