This isn't exactly the end of the Phillyherping blog. I'll call it brumation (the reptile equivalent of hibernation), a period of dormancy, sort of tucked into a stump hole but maybe poking out in nicer weather for little bits of activity.

I have been writing this blog for nearly seven and a half years. That's about seven cycles of herp activity - glorious, exuberant springs with peepers (Pseudacris crucifer) and spotted turtles (Clemmys guttata), summers with timber rattlers (Crotalus horridus) and box turtles (Terrapene carolina), autumns and winters with the salamanders, praying again for spring.

I can't say I'm running out of enthusiasm: each cycle is a new take on the annual phenomena. Each spotted turtle I find feels like a new friend even if it looks an awful lot like the last one (and even if the turtle itself is terrified for the duration of the reunion) is a fun encounter with a new friend.

The writing is getting a little hard to fit in, though. When I started the blog I was living alone (engaged to be married) and I had a relatively easy job as a low-level bureaucrat. Now I'm directing the office and it's harder to leave on time or play hooky on nice days, and Magnolia's arrival has eaten into the 'free' time I have. I'm not getting out as often, not for as long trips as I'd like, and when I get home it is hard to find time to sit down and write it up, which is pretty obvious given the longer-than-usual stretches between posts.

It only hit me recently that there are people (aside from relatives) who read this blog on a regular basis, and I apologize to you that I won't be writing it so regularly anymore. I am flattered that anyone reads this at all, let alone returns to read it. I appreciate the community you've provided for what is generally an oddball pursuit.

Maybe I'll think differently after the winter, but for now I'll be taking a break from weekly posting and taking the opportunity to post when I feel particularly compelled to write something.

This post has taken so long that I've been out again to the same spot. This is a good thing because I didn't find much on the first trip, just a cute but squirmy little ringneck snake (Diadophis punctatus)... 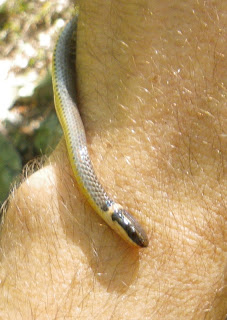 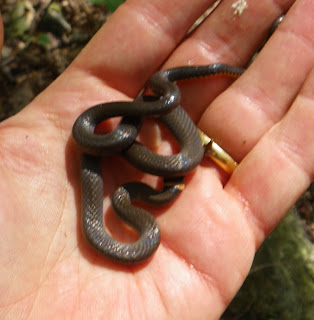 ...and the tail of a basking rattler (Crotalus horridus). Now, that tail looked kind of skinny. I had to wonder if this is a girl who just gave birth and is hanging around a bit before making the hike back to the den for the winter. 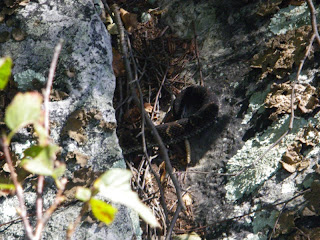 On the next trip I brought Magnolia, with all the attendant handicaps and benefits. We didn't see much out in the woods, but Magnolia reminded me how to have a good time. Each tree had more bark to inspect, and these rocks weren't just good for rattlesnake housing, they were a pleasure in their own right. 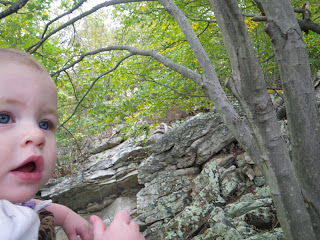 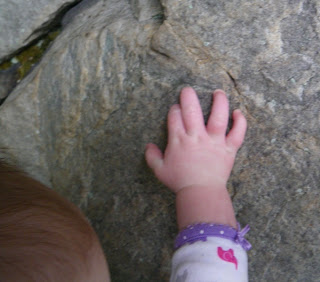 So the day wasn't a total failure when I gave up (I would have asked Magnolia for her opinion but she had fallen hard asleep.) and started hiking back to the car.

And if my herping experience has taught me anything it is that you don't actually give up until the moment you shut the car door. 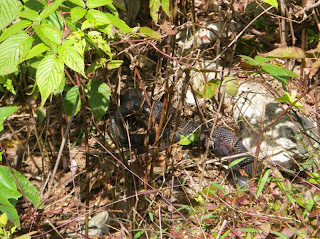 This black rat snake was a beast (I don't know what it is with this road on this mountain, but I'll keep coming back), and I couldn't walk past without at least trying to make its acquaintance.

Of course I had that handicap I mentioned earlier: about nineteen pounds of baby slung on my chest. So I took the photo above, tucked the camera away, briefed Magnolia on the plan, and carefully reached for the snake in sort of a slow-motion lunge that ended with me on my knees and my left hand and with my right hand holding a warm, muscular coil of the snake, which was now waking up and winding around the vegetation. (I'll mention that it was doing so very slowly and calmly, like it was annoyed that I had woken it up but not exactly angry or scared.)

It was my left hand that informed me of the thorns. I hadn't considered the species of plant the snake chosen for its refuge, but it was all blackberry.

I realized I faced a choice: I could crawl forward and try to extricate the snake, but that would involve dragging myself and Magnolia (who was watching the snake like she wanted to grab it - she is truly my daughter) through the briers and bringing her home to her mother covered in scratches. I could also let go of the snake, which would mean not catching it as well as enduring the disappointment of Magnolia (you could argue she's too young to be disappointed, and you'd probably be right, but she'll probably read this someday and think, 'Dad, you wuss, why didn't you catch that snake?').

I let go (for real, and I'm not just writing that because my mother-in-law reads this blog). I was sure the snake would bolt off into the woods, but instead it turned and gave me the gift of a good pose. I'm not sure if it was just a little scared and angry from having been grabbed (as if to say, 'hey there, good sir, I was taking a nap!') or just too stupid to realize I had been defeated by the briers, but it reared back in a half-hearted defensive coil before sliding away, which gave me one more halfway decent photo. 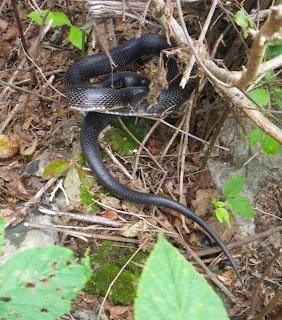 I know that a garter snake (Thamnophis sirtalis) isn't exactly a lunker black ratsnake, but this sighting was a little victory of its own. Many times I had walked past this spot on the road and heard a small snake retreating into the brush. Each time I had thought, 'sounds like a garter snake.' Maybe it would sound the same as a baby racer (Coluber constrictor) or any other similarly small snake, but garter is what I imagined, and garter is what I found basking right there on top of the brush along the side of the road. 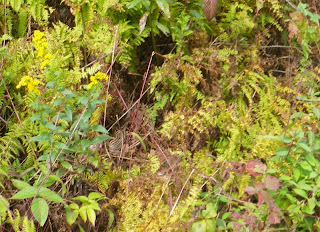 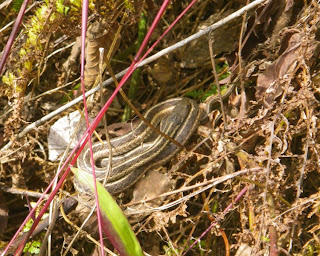 I let it enjoy the sun.
Posted by Bernard Brown at 7:11 PM No comments: