Scott and I just finished a report for the owners of a marshy property that we are privileged to herp. Writing up a report is no fun at all compared to finding the herps to report on (I'm sure any professional herpetologists reading this are groaning at how little I know about this sad aspect of their lives), but we're glad to have it done.

A lot of herpers drive past beautiful private property and simply wish they could get back there and slog around, look under logs, etc. In this, our scouting season, I recommend highly that you stop, knock on a door if you can find it, and ask permission to herp back there. Be polite, present yourself well, and try to imagine total strangers asking for permission to wander around your property as you prepare your pitch. The worst they can say is 'no' (I suppose they could pull out a shotgun and release the hounds, but if you're just politely knocking on the door, that's unlikely), and they might even say 'yes.'

We're not professionals, so we shouldn't try to pass off our observations as of the same rigor as a proper survey (though there are certainly ways we can try to be methodical about how we herp), but if someone lets you herp their property, thank them for the privilege by writing up what you find. Conservation-minded land owners might find the report genuinely useful, but even those that are just interested in other things might be tickled to have a report they can show the neighbors.
Posted by Bernard Brown at 6:03 AM No comments:

I'm not one to give up on a major goal like trying to see as many map turtles (Graptemys species) in one summer, so for my birthday, in late October, utilizing cheap plane tickets and enough credit card and some more hotel points, I again ventured South for a whirlwind adventure.

The weather (and resulting river conditions) would again make or break the trip, but the late date added another way it could do that: temperature. If you're in southern Alabama or Mississippi in May through September, you can pretty much rule out cool weather. Not so on the brink of November, when highs in the 60s and chilly water can scuttle a snorkeling stop.

I started off thinking about the weather, but I hadn't thought enough about the angle of the sun. Turtles tend not to bask in the shade. Additionally direct, penetrating sunlight is a big help when you're looking around underwater. The creeks and rivers I'd be exploring tend to run between deeply incised banks and are flanked by a corridor of trees. In the summer the sun quickly gains enough height in the sky to hit the water early in the morning, but not so later in the season when it rises above the trees later in the morning and is pretty much useless after 3:30pm. In August I might have time to hit one spot, drive three hours, and then hit another. In October each day was limited to just about one location.

I got pretty lucky with the weather on the first day but had poor results. 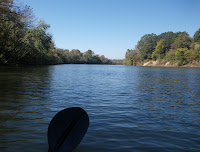 I was working on a larger river than those that Scott and I had been exploring previously (aside from the Delaware, of course, but somehow my familiarity with the our local mighty river shrinks it for me to something manageable), the water was a little murky, and the risks of something going wrong fifteen feet under water without a herping buddy right there spooked me from exploring the deeper logs. This might not be obvious for those who haven't spent much time in rivers (it wasn't to me), but wood does get waterlogged to the point that it sinks to the bottom of a river. Add a few layers of old waterlogged trees in a deep section of a big river, and you can end up with deep, tangled stacks of logs. For example, note the few branches sticking above the surface in the second photo below. I dove in there, and it was like an enormous Pick Up Sticks below. These must be perfect for a hiding turtle, but I am too wary to dive down and explore them on my own.

Here's who I saw above the surface, before they dove in. I think at least one of them is an Alabama map turtle (Graptemys pulchra). 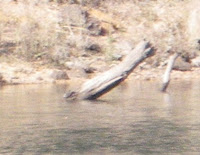 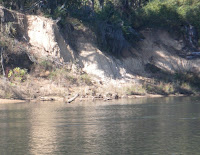 The next day I woke up in Mississippi and the weather was terrible. It was chilly, cloudy, and drizzling. Nothing would want to bask, and even with my new wetsuit, the water would be unpleasant to explore. However given the options of sitting in a hotel room doing nothing or getting out in beautiful terrain and hiking around, I decided to hike/slog around. 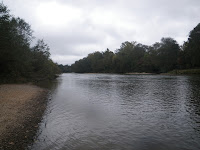 I did find one turtle, this razorback musk turtle (Sternotherus carinatus). To paraphrase Eitan, it was not a turtle-less day! 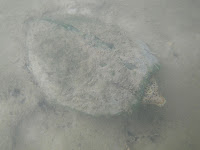 More interesting, though, were tracks I saw on a wide, tall sandbank.

I thought to myself, 'that ain't no turtle,' and David Steen (who comments here and has his own fun herp-themed blog Living Alongside Wildlife) confirmed my suspicions that they are likely alligator tracks, and then blew my mind by informing me that Southern creeks and rivers often host alligators. I have always thought of alligators as a species of still water (lakes, ponds, marshes), but apparently they dig flowing water too. Now if that wasn't enough to spook me a little, it turns out that the alligators that particularly like the creeks and rivers are the bigger males.

The next day I ended up with beautiful weather. I decided to begin the day simply enjoying a paddle on a beautiful river, a seemingly simple excursion on which I both found a wayward box turtle (Terrapene carolina) and mortally wounded the Raftemys.

Luckily I didn't need the boat for the creek that was the main attraction, and the luck only continued. I saw several Pascagoula map turtles (G. gibbonsi), all of which dove into some of those deep tangles of logs and escaped me. 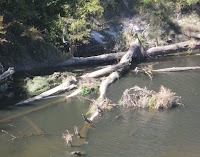 I also saw some of the lovely sawback for this river system, the yellow-blotched map turtle (G. flavimaculata). 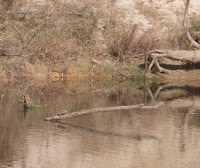 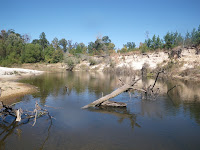 Do I need to mention that I found a river cooter (Pseudemys concinnus)? 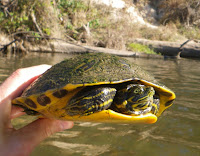 That (the whole trip, not just the cooter) merited a stop at Dairy Queen on the way back to the airport for a victory Blizzard, and since that trip I have officially wrapped up obsessing about map turtles... until the season starts again in a couple months.
Posted by Bernard Brown at 4:29 AM No comments: