I like to throw the term 'mystery' around a lot to indicate I don't know what kind of critter I'm looking at. For example when I say 'mystery frog' I usually mean some kind of frog that jumped in the water before I could get a good look at it. When I say 'mystery turtle' I'm usually talking about the distant basking turtle that slides in before you can get a good look.

In this case I know what kind of turtle this is (Red-eared slider - R.E.S. - Trachemys scripta), but by 'mystery turtle' I mean I am mystified by its location. I took this photo (sorry for the gory DOR shot - in this case I'd call it 'road pizza') half a block from my apartment building in West Philly, far from any natural body of water it could have called home. 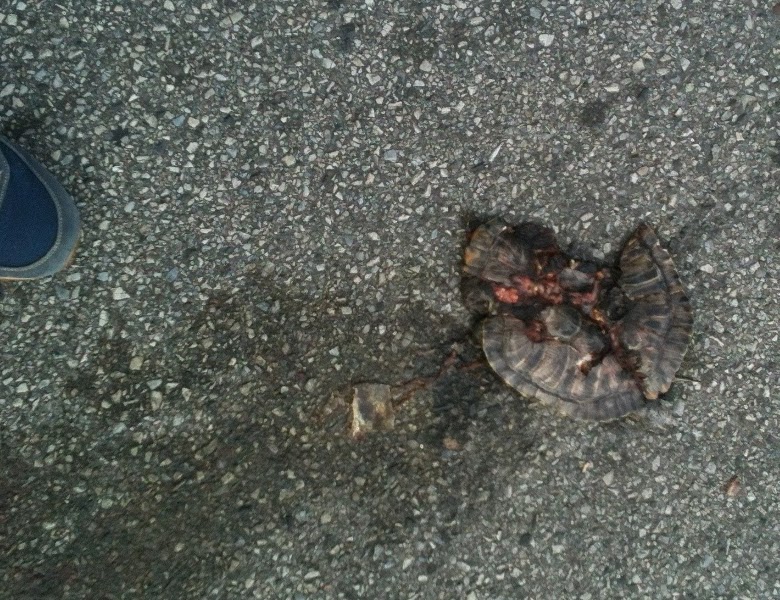 I saw it just before dawn on Friday as I was riding my bike to the Y for a pre-work swim. I was in a rush to get into the pool and expected better light once the sun was above the horizon, so, figuring it wasn't going anywhere fast, I took the photo on the way home.

Could it have been a pet? RES are native to the middle part of our country, but they are frequently kept as pets and too-frequently released into the wild. A lot (I'd bet the vast majority) of the former pets probably die, but enough have hung on to establish breeding populations in Philadelphia's waterways to possibly threaten some of our native species. In this case it was miles from the nearest likely body of water, though. It must have been a pet.

I suspect I know whose pet it was. It was ours.

Of course if it had escaped from our apartment I would have known more certainly, but that's not what I mean (and we don't have any turtles). Our building is blessed with a huge garden space on the roof of our one-story parking garage. The Upper Garden, as we call it, actually has a duck pond in the middle of it. Over the years it had become highly eutrophied, loaded with nutrients that kicked off chocking algae blooms, turning the water to the consistency of spinach souffle - yum.

Early this spring a couple neighbors and I finally decided to clean out the pond (our management has shown a high level of indifference to the Upper Garden - great in that it lets us garden the space how we see fit, which is why I have an enormous vegetable garden in the middle of a high city), employing a rented pump, shovels, and buckets to empty it of about 20,000 gallons of water and muck. Then one of the building's plumbers took over. It turns out the guy is a backyard pond enthusiast, and pretty soon our duck pond was hosting a range of aquatic plants and a school of goldfish. It was really gratifying to have our hard work pay off to the point that an expert wanted to take it from there and make a real pond out of our former muck pit.

I wasn't happy, though, when he tossed in a RES. I was thinking basic husbandry thoughts like, 'so, who is going to feed the turtle? What do we do in the winter - who is going to take it in to hibernate?'

I hadn't imagined that the turtle might somehow get out of the pond, cross the grass to a section of the edge of the Upper Garden with a fence that a turtle could fit under, tumble over the side onto the sidewalk, and then walk into Pine Street to get mashed into the asphalt. But it's been a few days since we've actually seen the pond turtle, so now I'm really wondering if the mystery turtle is ours. I guess if we see the pond turtle again we'll know who the mystery turtle isn't, but if we don't...?
Posted by Bernard Brown at 7:45 PM 3 comments: