The streambed salamanders, on the other hand, can find themselves suddenly in the middle of a torrent. I’ve mentioned before that I usually find two-lined salamanders (Eurycea bislineata) under rocks that are a little in the water, a little out of the water. I imagine they risk getting flushed away when all that rain water turns the edge of the stream into the middle of the stream.

At the end of the summer of 2004, a series of major storms flooded the Wissahickon Valley, causing millions of dollars of damage. Rock slides blocked Forbidden Drive, and flooded streams washed out bridges and trails. The streams running down the steep sides of the valley into the Wissahickon were already rocky and damaged from routine runoff upstream in the surrounding streets, sidewalks, and roofs, but the storms send tons of rock smashing through, not just scouring but completely remodeling the streambeds. Imagine a three inch creature so fragile as a salamander in that kind of tumult.

How we found two species of streambed salamanders (two-lines and longtails, Eurycea longicaudia) last year is beyond me, but it’s brought us back flipping rocks in some of the most polluted and degraded streams running in the region two or three times since. 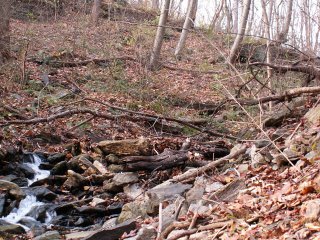 We were on a walk in the Wissahickon last week (Saturday the 11th), and while we were due to hang out at my grandparents’ apartment, we still had to stop to see if we could find anything. We checked a lot of rocks, but we just found one salamander. 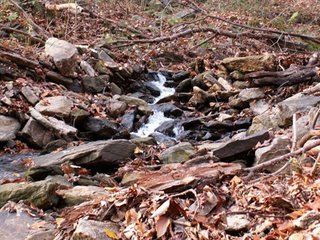 Catching two-lines can be a bit of an adventure. You pick up dozens of rocks and find nothing. Then you pick up one rock and see the flash of wet motion that you barely saw well enough to be sure what it is. You pick up the next rock, and there it is again, but it’s gone again under another rock before you can grab it. Then it’s gone under a whole pile of rocks, and you’re faced with a real excavation if you want to catch it. Of course getting under the rocks is just part of the struggle; you also have to grab a wet, slippery little salamander out of the water, similar to catching a minnow barehanded.

I was upstream from Jen when I heard her shouting and cursing. I scampered down, and watched her go from rock to rock. It took at least eight tries, but she finally got her hands on this little guy: 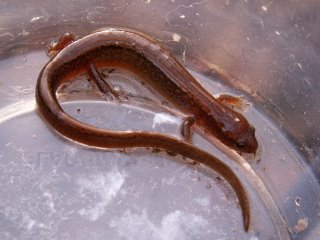 Not much, I know, but a lot of fun for November.

Conditions were sunny and 68 degrees a little before 3pm.

- 1 two-lined salamander
Posted by Bernard Brown at 2:03 PM No comments: