I've written several times about our herping at a large, privately held marsh to the west of Philadelphia, in the piedmont landscape of farms, forests, and (increasingly) McMansion subdivisions. I would thank the landowners by name if I felt comfortable letting on to where the site is. Scott and I have felt incredibly lucky to be involved in the conservation of such wonderful habitat.

So what exactly have we been doing to earn our keep? Well, we've been generally herping the site, recording what we see and when, getting a feel for the herpetological biodiversity of the property. We've also been in touch with the PA Herp Atlas Project and, with some guidance from Tim Maret, who runs the Atlas Project, we have paid special attention to spotted turtles (Clemmys guttata).

Now, spotted turtles are considered a special find wherever you are, but in Pennsylvania they seem to be harder to find than elsewhere in our region. Last year we found all of four at the site, and that was in a lot of hours of searching plus a trapping day with Tim and one of his volunteers. By the end of the season Scott and I were scratching our heads and wondering what we were doing wrong. Maybe the population was just less dense than we were used to seeing.

This year started slowly as well. Scott caught one at the end of March, about when things get rocking in South Jersey, for example. but that was it. We put in some really intensive effort on some of what we thought were absolutely PERFECT days (sunny, air temps in the 60s, water cooler than that) and came up totally skunked. It was the kind of herping that makes you want to take up bird watching, but we're stubborn even if we're not too bright, and eventually we started getting better results.

In particular the season seemed to turn on Earthday weekend. Shoshi picked up three basking turtles like they were just chilling there waiting for her, and then the next day Scott found a half dozen crawling around at high temperatures (high 80s) in the middle of the afternoon.

May rocked, and by the middle of June our totals had hit about 35, and not a single recapture among them. We were concentrating on one section, maybe a couple acres, but still finding them in other sections when we tried.

As we examined turtle after turtle, measuring, photographing, and then organizing all the notes and reviewing photographs of turtle after turtle, each in an identical position, but, because of the consistent positions, easily notably different from all the others, with its own scars, spot patterns, and texture, we felt a growing sense of familiarity. These weren't just anonymous turtles in yet another vernal pool explored, these were individuals we were getting to know, in a community of turtles we were learning a little better with each additional turtle we found. I suppose this is a joy of proper field biology that we dilettantes miss out on, a sort of meditative immersion in the world of the animals you're studying. I enjoy it immensely, whether with brown snakes or spotted turtles, and I hope to continue these projects over the coming years.

In general, the turtles at this site are not pretty. See the NJ road cruising post below for an example of a beautiful spotted turtle, smooth and black with bright yellow spots. These, by contrast, were often extremely rough, rugose with highly sculpted scutes, and often with barely any spots at all.

That rough texture is a sign of youth in spotted turtles. All turtles (as far as I know) add a new layer of keratin (the substance that makes up our hair and nails) to the base of their scutes each year, but over time they get worn away or flake off. So, for some species such as spotted turtles (box turtles too), a rough turtle is usually a young turtle. That guideline correlated well with other features of aging. The smoothest turtles were usually the ones with other scars and shell damage, and no small turtles were smooth.

I think the season is pretty much over at this point - not because the turtles have necessarily stopped moving (they might estivate - summer version of hibernate - if it gets too dry), but because the vegetation is too tall and thick for us to see them easily. So now it's time for a spotted turtle review!

First, here's the first turtle of the season, a really rough one. Note the lack of spots. This plain, rough turtle looks a decent amount like a bog turtle (Glyptemys muhlenbergii), but on closer examination was definitely a spotted turtle: 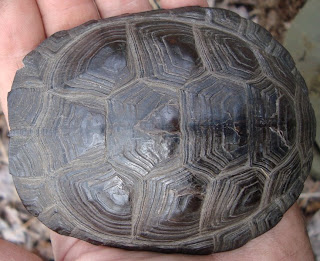 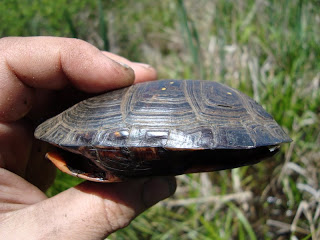 Let's go in increasing order of apparent age from here. So, first up, the cutest turtle in the world! 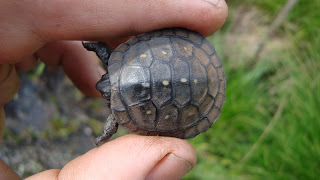 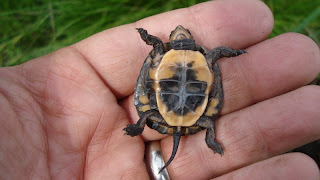 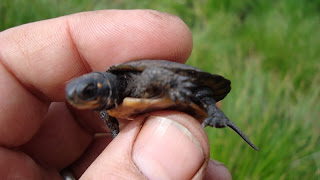 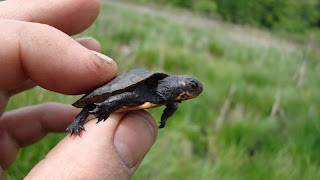 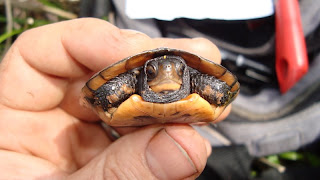 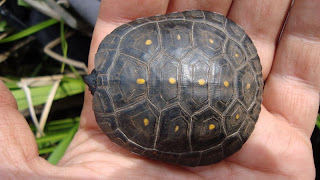 ...and another, a little older yet, maybe seven or eight years (based on counting the layers of the scutes, or annuli)? Note that this turtle is still not full grown. It also has an irregular scute on its back: 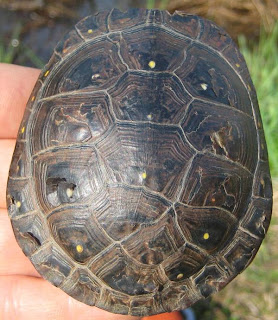 Here's another young one, what I'd call full grown but with a little more growth left: 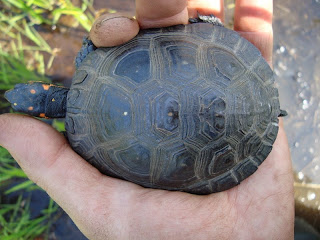 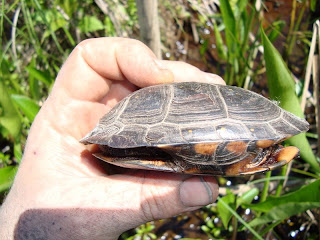 Those rough scutes are starting to wear away on this one: 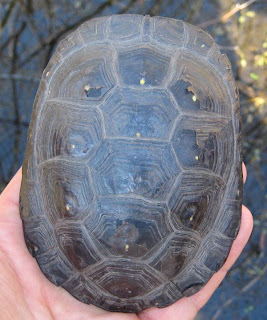 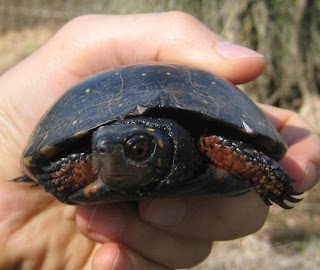 This one is probably really old, worn smooth and shiny: 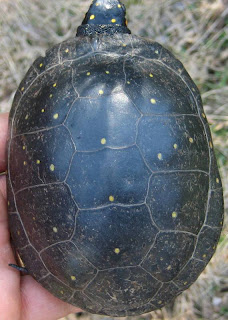 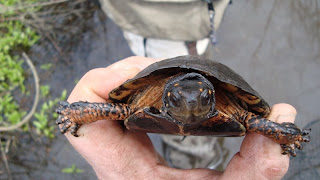 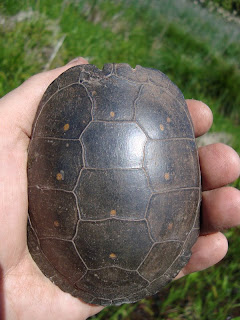 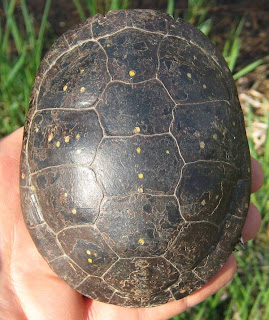 I'll wrap up with what I think is a cute series. I know it might be anthropomorphizing to write that individual turtles have distinct personalities, but I'll go out on a limb and suggest it. Here are four turtles showing ranging from shy: 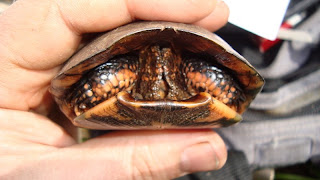 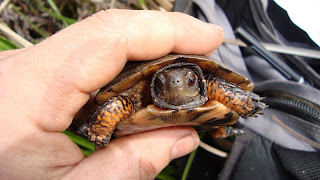 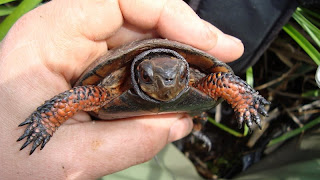 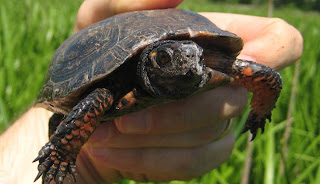