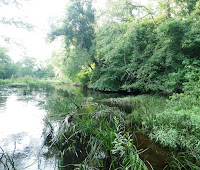 When you can't stand the heat on the land, get in the water. That doesn't quite have the 'heat in the kitchen' ring to it, but it's my herping motto this time of year. Of course the trophy species for my aquatic herping right now is the map turtle (Graptemys geographica), but I also dig the so-ugly-it's-cute stinkpot (Sternotherus oderatus).

Jen and I recently hopped in the car, fleeing 100 degree temps in West Philly, and drove to a spot on the Maurice River in S. Jersey that is home to a population of introduced (though native to much of the rest of the country) spiny softshell turtles (Apalone spinifera), though I had never seen them.

I still haven't, but the stinkpots sure act like they own the place. It took very little time or effort to find this guy, even with the water a little high and a little murky. 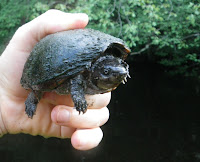 I'd still like to find a softshell. Maybe I'll try a PA spot where they've also gained a foothold.
Posted by Bernard Brown at 4:47 PM No comments: