There are a lot of species in our region that I haven’t found yet. Some are famously rare, like the scarlet snakes (Cemophora coccinae) of South Jersey, or the bog turtles (Glyptemys muhlenbergii) anywhere in the . Others aren’t exactly endangered, but are just hard to find, such as the hognose snakes (Heterodon platyrhinos). If I kept a life list, I think I’d find a lot of species that I still could cross off, and it’s easy to fall into the trap of spending all my herping time and energy on hunting them down.

But then I have a trip like Sunday morning’s and I remember that I can have as much fun seeing an old, familiar species do something new and interesting.

On September 15th the Heinz Wildlife Refuge at Tinicum hosted a Birding and Wildlife Festival. It seemed like a great opportunity for the boys I’ve been going herping with around Philly, so Vivianne packed them into her car and met me at the Refuge Sunday morning.

We found plenty to get excited about inside the visitor center. There were huge owls and hawks outside the visitor center as part of a raptor display, and inside there were parrots and cockatoos. There was also a turtle display at which the boys could reach out and touch some of the critters we usually only spot from far away, including an absolutely adorable hatchling snapper (Chelydra serpentina). Forgotten Friend Reptile Sanctuary (http://www.forgottenfriend.org) set up shop in a classroom with some of their snakes and turtles, so the boys finally got to see a python (I hope this finally shuts them up, since we won’t be seeing any outdoors).

The real fun, however, was outdoors. The day started with cool rain and drizzle, but the sun broke out (for a high in the high 60s and low 70s) from behind the clouds mid-morning. By 11 we had some gorgeous herping weather to head out to the Impoundment (see the map here http://www.fws.gov/northeast/heinz/Heinz%20Gen%20Map.pdf). On our way there, we looked across to check out some basking painted turtles (Chrysemys picta). I’ve seen lots of basking painted turtles, so although I was happy to see them, I can’t say I wanted to linger there. 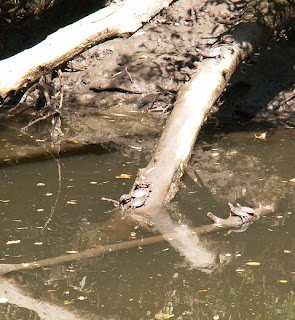 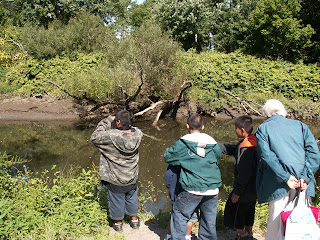 I wanted to check out the wide expanse of mud exposed by the low water level in the Impoundment. I remembered all those wide troughs left by snapper lumbering from pool to pool, and I was hoping I could catch some in the act of wading through the mud. 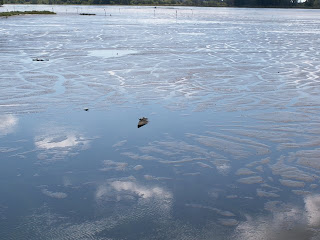 We headed out on a bridge that crosses the Impoundment. This bridge makes for some fun turtle watching when the water’s higher. You can usually see a lot of painted turtles floating around and looking right back at your.

We saw this little guy (3 inches or so) catching some rays on some emergent sticks. 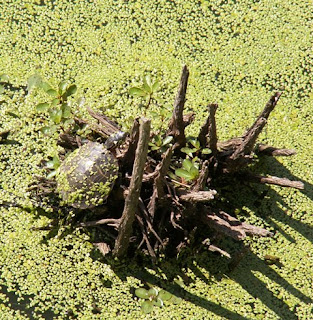 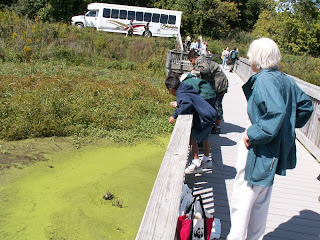 Then I spotted our first muddy friend. 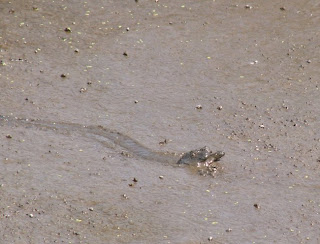 Lumbering isn’t exactly the word for it, but this little turtle (maybe 2 inches?) was slogging its way through the mud. I’m not sure where it was going or where it was coming from, but it looked like a lot of effort. I quickly spotted a few more. Here’s a closer look at another one doing the same thing. 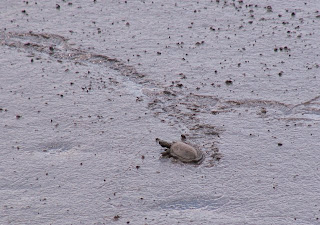 It was hard to tell the species at first. I was hoping they were little snappers, but it soon became clear that they were all little painted turtles. Some seemed to be going from water to water, but some had clearly just popped out of the mud – their tracks in the mud led back to little dugout pockets in the mud and not back to any water.

This one hadn’t even climbed all the way out of the mud. It just stuck its head out to look around. 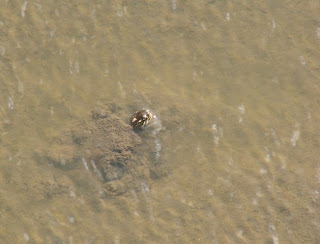 This larger turtle (the largest I saw at about 5 or 6 inches) was taking advantage of a snapper track, walking up the track and apparently trying to catch the minnows trapped in the shallow trough. 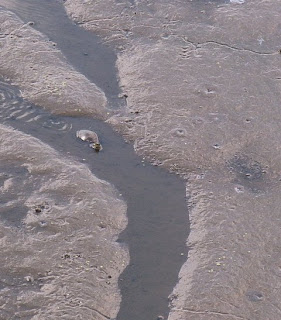 Here’s the one frog (a bullfrog, Rana catesbeiana) we were able to spot from the bridge. 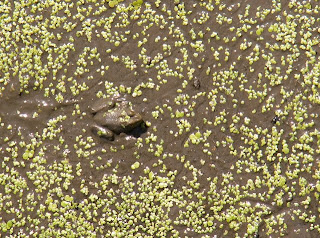 At one point the boys started shouting and waving at me from across the bridge. I trotted over, and they exclaimed that they had just seen a snake. I was a little dubious at first, but then I saw it too, a northern water snake (Nerodia s. sipedon) foraging in some very shallow water and duckweed. It was hard to get a good photo in the shadow of the bridge, but here’s what I could do. 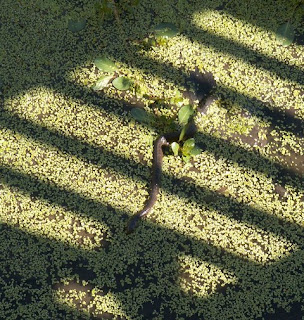 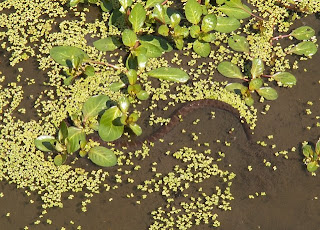 We walked down to an observation deck and spend some more time watching painted turtles, and then headed back to the visitor center. 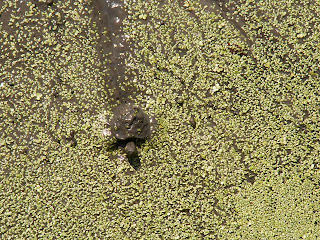 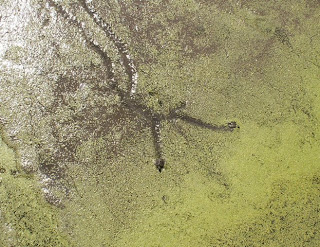 I had been wondering where all the bigger turtles were. There are redbelly turtles (Pseudemys rubriventris) and exotic red-eared sliders (Trachemys scripta elegans) throughout the Refuge, but all I’d seen were painted turtles.

Finally, through a tangle of trees and vines along , I spotted a log covered with black, flat, serving platter sized redbellies. There was no clear view for a picture. I worried I’d spook them if I squeezed through, so we just admired them for a moment and headed back to the visitor center. 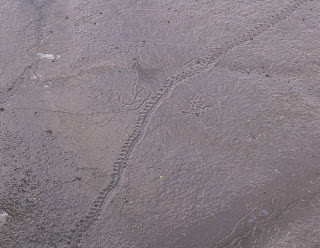