I've wanted to eat lunch with timber rattlesnakes (Crotalus horridus) since my encounter in late August. The idea that these big, beautiful snakes just keep on doing what they're doing as long as I don't get too close just tickles me to no end, so much so that I've wanted to bring a lawn chair with me all the way up one of the right mountains to sit back and chill with them.

On Wednesday October 15th I checked that off my herping to-do list with Eitan. He had emailed me earlier in the week, and with a little finagling I was off work and we were driving up into the mountains. We checked out yet more rocky outcroppings (I think we covered at least eight miles that day) and then a familiar stretch of rock, but it took a little more searching to find the party.

I had followed Eitan up onto a new slab, when he stopped and announced that a big, beautiful yellow timber rattler was basking just on the other side, more or less where we were planning on stepping in another second or two. 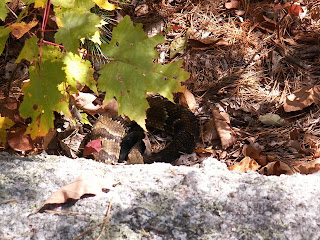 We each took our "safety shots," as Eitan calls them, and then he crouched down to take some closer pictures. 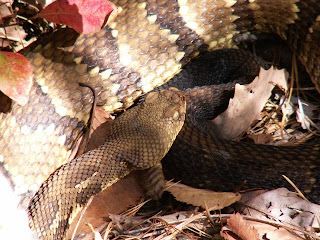 I was happy with mine but afraid to step off the rock for fear of startling the snake. So, I started very carefully looking around us, since where there's one rattler... there's another basking fifteen feet away! 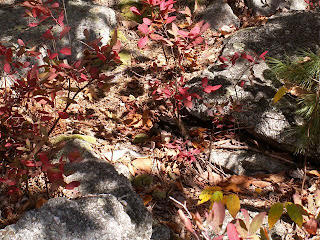 Picking out cryptic snakes in a sun-dappled background takes a kind of methodical discipline I usually lack. You have to look around and give your eyes a minute to let shadows or charred stumps resolve into coiled snakes. Usually whatever I'm staring out stays a stump or a pile of leaves (and then there's this pain-in-the-ass black lichen that curls off the rock and looks just like a coil), but every now and then it turns into a beautiful black timber rattler. 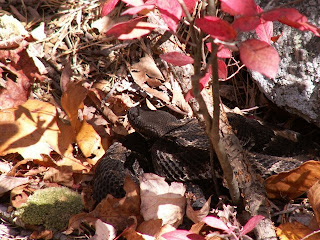 And then it happened again. This time I was staring into the shadow of a tree, and again it turned into a snake. 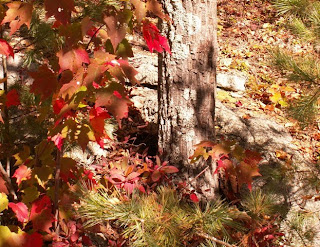 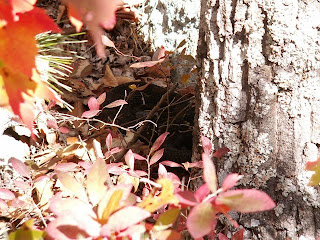 That's about when we declared it a fine time to eat lunch and pulled out our sandwiches. The snakes just sat there doing what they were doing while I munched on my PB&J and we discussed just how awesome timber rattlesnakes actually are.

With lunch over, I circled around to get a picture of the snake behind the tree. What a spectacular snake. I have no idea why it was sitting out in the open and not in the sun, but we were happy to stare at it a bit longer. 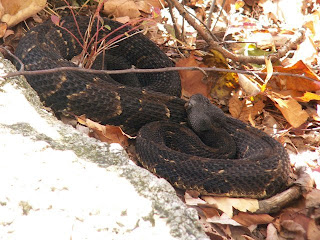 We had one more rattler to find, this one through no dedicated or highly focused landscape examination. I simply put my hand down on a waist-high slab of rock with a boulder on top of it and noticed a snake in a crack three feet away. See it? 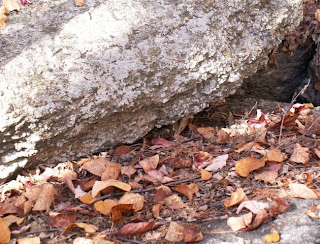 I walked around for a better look. 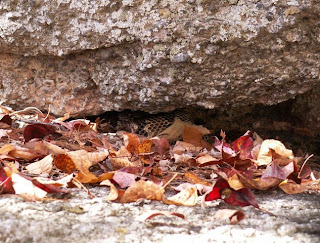 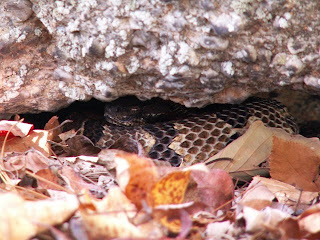 We didn't just see timbers on this trip. I know that it will sound horribly ungrateful to complain about seeing only timber rattlesnakes on these trips, but I have been confused by the lack of smaller snakes this fall, when my tried-and-true method of flipping rocks along trails hasn't produced the usual ringnecks (Diadophis punctatus) and garter snakes (Thamnophis sirtalis). I was genuinely thrilled to see a garter snake in a patch of sun next to the trail. Here's the little guy. 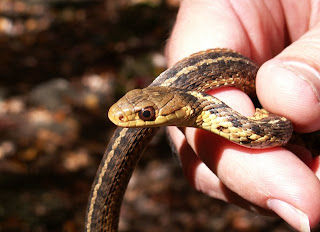 And last, and maybe kind of least, here's a wood frog (Rana sylvatica) that neither of us saw until Eitan accidentally kicked it in the grass. 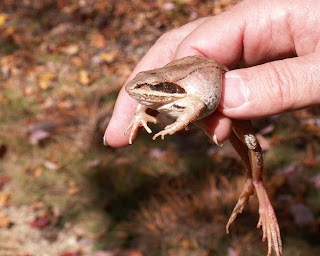 And here it is hopping away. 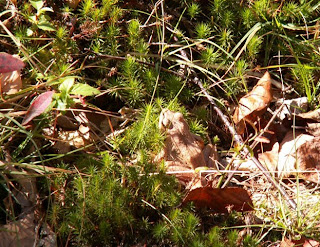