The latter applies to me these days - the ankle I should still be resting after that excessively long bike ride from a couple posts ago, and then last week a painful, albeit quickly recovering lower back problem. I figured I just might be able to hack some low-grade muddling - feeling around in mud and weeds for turtles.

I was particularly interested in some cooter. That isn't dirty, cooter (an interesting word descending from an African term originally brought over by slaves) is the common term for turtles in the genus Pseudemys, mostly Southeastern river turtles. I just got back from a Florida vacation and had a great time down there with their cooters. We call our local cooter species "red-bellied turtles" (Pseudemys rubriventris), and I figured I might as well get in the water and start looking.

Not a bad place to wallow around for an hour or so, even if I didn't catch anything.

Here's one of the turtles I wasn't catching: it's the dark shape sticking out of the water in the foreground. They do this; they watch you from a safe distance, safe in the knowledge that you can't swim as well as they can.

Still, I got to thinking I could snorkel in this kind of water. I'm not sure how well I'd do at catching anything, but the water, although orange with iron as is usual for the Barrens, was clear enough for me to see about a yard, which will get me to the bottom for the most part.

I decided to do a cruising passes on a nice road on the way home, the situation filling two of the three valid excuses for road cruising (heat and physical limitation).

Road cruising in the Barrens usually turns up very little - some Fowler's toads (Bufo fowleri), maybe some other assorted frogs, some of our local snakes smeared all over the pavement, and if you're really lucky, maybe, just maybe a live snake.

It gets boring pretty quickly. I drove back and forth, seeing toads hop out of the way. I did stop and take a photo of one as a voucher for the NJ Herp Atlas Project - winding up this year, but I'll do one last set of reports at the end of the season. 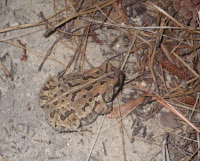 ...and then I saw something different. It seemed like the most natural thing in the world when my eyes fixed on it, but there on the shoulder was a small timber rattler (Crotalus horridus), crawling along the road, not across at a quick perpendicular angle like most snakes have the sense to do. 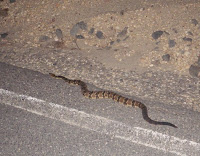 I hopped out of the car to take some photos and to shoo it off the road - asphalt is no place for a snake to hang out... as the next find made clear.

I had turned onto a faster road to head for home, tailed by someone probably late for their party, when I saw my headlights shining off the sides of coils in the middle of the lane right in front of me. I couldn't slam on the brakes, so I held my breath, swerved over to the shoulder to let the car past, pulled a quick U-turn, and jumped out to see if it was still there.

This is one of the worst feelings in herping, that I might have been forced to let a snake get run over. I pictured one of the tires behind me catching it enough to kill it, but not quite instantly, so that it would writhe around in agony or try to drag itself off the road before expiring.

Sure enough the snake was dead, but - and this made me feel the slightest bit better - it only had the slightest bit of reflex movement left in it. I interpret this to mean that it had been dead for a few minutes, longer than a split second, long enough that I could have done nothing to save it. Here is it, where I pulled it over to the grass for a photo.

At about three feet this absolutely beautiful eastern or 'chain' (from the white, chain-like pattern on the shiny black background) king snake (Lampropeltis getula) was a good deal longer than the glimpse I had caught of it in the middle of the road; I'm pretty sure it was already half-coiled in a pile from its death throes when I had spotted it, not stretched out to get across the road.

This is another reason I don't like road cruising at night, in addition to the laziness of it all and the stark, de-contextualized encounters of snakes on asphalt, habitat hidden by darkness (might as well be on your driveway). It just depresses me to see so many beautiful creatures dead.
Posted by Bernard Brown at 5:49 PM 3 comments: