I couldn't quite get used to the jets tearing through the air just overhead, but the turtles didn't seem to mind. Here are a couple of what I think are red-bellies, the second shot zoomed in and heavily cropped. 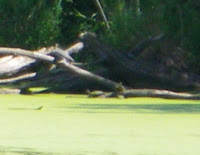 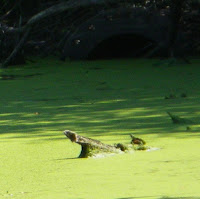 They did spook when I sat down, the near turtles tumbling off their log (it might have been a smallish rusty barrel coated with algae). I waited in the shade as, one by one, they dragged themselves back up to enjoy the sun that I was avoiding. 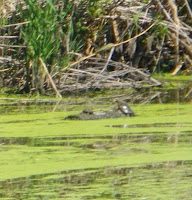 I was proud of how still I managed to stay; I even fooled this butterfly. 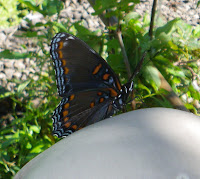 None of these turtle photos turned out very well; my new camera is waterproof but doesn't have the greatest zoom. The cropped/zoomed shot near the top is of two larger turtles, I'd like to think red-bellies, our only local cooter (Pseudemys genus) and a rare species in PA, where its coastal plain habitat was scarce to begin with and is now mostly developed... for example by the airport. 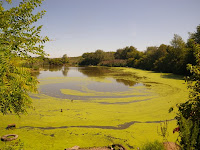 Case in point - here are the remains of a DOR red-belly that looks like it tried to cross the road and ended up against a fence around the airport. 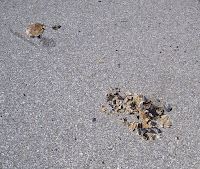 I suppose I could go to the John Heinz NWR and watch these same species there, but there's something fun about the juxtaposition of the planes and the fauna, the life apparently holding on in ponds fed through old culverts by tides lapping up against interesting trash like this discarded chainsaw.

And it's all easy to reach on my bicycle. Check out my trusty steed, loaded down with the day's supplies: 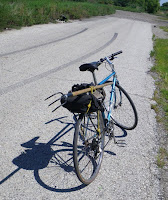 One more thing - I found what sure looks like a boardline on some vacant land nearby. If this is your boardline, I found nothing underneath, but did put some of the pieces back where they had apparently started out, judging by the dead-grass silhouettes. For any new herpers out there who stumble upon a boardline, try to avoid the temptation to flip them, but if you can't (who can?) make sure to set the cover items back EXACTLY how you found them. Check out Field Herp Forum for dozens of rants by angry herpers who found their carefully arranged boardlines messed up by careless intruders. 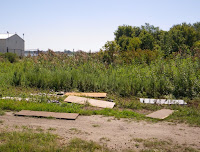 Posted by Bernard Brown at 5:04 PM No comments:

Last week, frustrated at an aggravated ankle problem and limited herping time I went cruising - I write that like someone falling off the wagon, but I again learned my lesson - I estimated that between gas and tolls I spent about 25 dollars, wasted a few hours, and saw all of about 15 Fowler's toads (Bufo fowleri) and a couple leopard frogs (Rana utricularia). 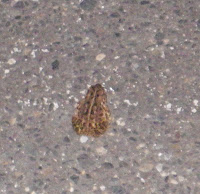 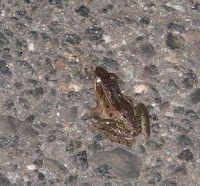 Of course if I had cruised a rat snake (Pantherophis obsoleta - I started a little before dusk) I might have felt some guilty pleasure, but next time I go cruising, I resolve to at least do it closer to home.
Posted by Bernard Brown at 6:11 PM No comments: