The turtles are up in the Schuylkill. I went for a ride before work on Monday morning and kept stopping to peer through the line of trees along the river. That bump on a log? Nope, just a bump. That one? Yep, a turtle.

I figure most of the turtles I saw were the introduced and likely invasive red-eared sliders (Trachemys scripta); I noted the red ear stripes on a couple, and they're the default turtle these days in the river as it runs through Philadelphia. A couple might have been the native red-bellied turtles (Pseudemys rubriventris); these had visibly orange plastrons (bottom shells). Here they are in a camera photo so bad I nearly didn't post it (and that's saying something for me).

I'll be observing as the temperatures, particularly the water temperatures, warm up. Although the spring has been entirely too dry so far (I garden too), and I am hoping for more rain than this, I am also hoping that we stop short of last summer's series of deluges that kept our local rivers too high and turbid for turtle snorkeling. This summer I'd like to catch some of those Schuylkill River sliders, and maybe some of the more-elusive Schuylkill River map turtles (Graptemys geographica).
Posted by Bernard Brown at 5:45 PM No comments:

I'm on a train back from Harrisburg after a work visit. The rocks in the Susquehanna were encrusted with basking turtles. It is painful to be trapped on a train.
Posted by Bernard Brown at 1:11 PM No comments:

Usually we focus on the pretty turtles, but here's an ugly spotted turtle (Clemmys guttata) that I found pretty interesting. Here he was basking on a tussock just after the sun chased away a cloudy morning. 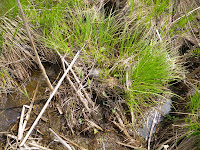 Take a look at this shell. This guy has been through a lot. I figure something must have gnawed at it for a while before getting up. 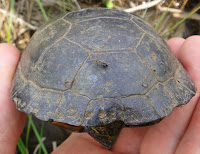 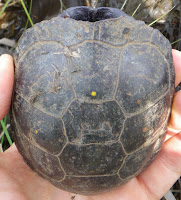 What I couldn't figure out was his tail. I figure it must have been broken in the attack and healed in this sharp, down angle. As usual, most of the painted turtles (Chrysemys picta) slid into the water as I approached, but one very large gal stayed put. I figured that was worth a photo. 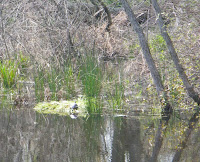 The tadpoles from a couple weeks ago were still there, though a little bigger. One of their puddles looked like it was pretty close to drying out, and I didn't recall much rain in the forecast. So, I cut a little channel from a larger puddle to raise the puddle level a little bit. I know, I'm tinkering with 'nature,' but they'll probably all die anyhow when they're devoured by spiders, birds, and hordes of other predators as soon as they grow legs and hop out of the water. 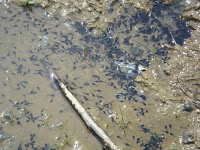 Posted by Bernard Brown at 5:44 PM No comments: