We had planned a trip for Sunday, back in the middle of the week when the meteorologists forecast a mix of sun and clouds, but the weather shifted on us, as is the spring's habit. On Saturday (March 3rd) morning I woke up and got ready to go running, but the sun outside and the forecast for partly cloudy all day quickly infected me with the NEED to get outside and do more than just run, I needed to go herping!

So, I called Simon (apologies to Scott who I know had to work), asked Jen if she'd like to come along, and soon we were all in a large, privately held marsh in the rolling hills to the west of Philadelphia.

It appeared that our ambitions were a little ahead of the season - instead of soft, squishy, sucking mud we mostly walked on a creaking, cracking layer of ice just below the mud. I think I saw something dive just before I got a good look - not sure frog or turtle - and we heard a handful of peepers (Pseudacris crucifer), but otherwise the marsh was really quiet. We did see some painted turtles (Chrysemys scripta) basking in a couple ponds, one of which was literally half frozen still.

Here's a shot of a marshy creek, a picture I took because for a moment I thought the stick sticking out of the water was a turtle, but it shows a nice view of the landscape. 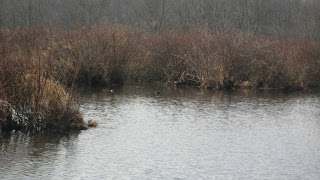 Here's a board we checked in a field. Scott and I put these out only a few weeks ago, and we were happy to see that voles had taken residence under almost all of them. Voles are really cute, and I'm always happy to see them, but I admit feeling a little guilty that we're luring them in to attract snakes that will, of course, eat them. 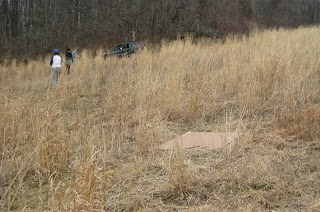 The skies went from blue to cloudy and hazy, so we called it a day at that site and drove back to Philly. I couldn't give up the day yet, though - I was infected by the drive at that point and had to keep going.

I drove to the cemetery and got flipping. The redbacks (Plethodon cinereus) were out in decent numbers - I found six or so with little effort, but of course I've been finding those almost every month of the winter. 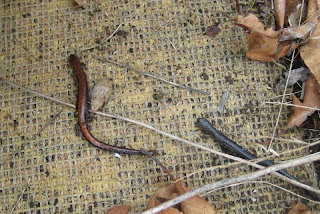 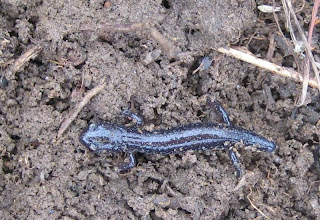 Here's one that jumped from my hand and tried to escape into my backpack. 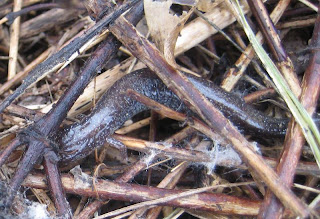 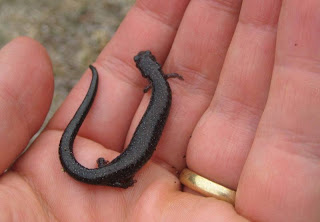 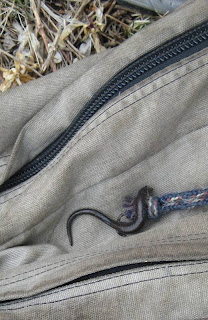 Much more thrilling, though, was this little critter, the first snake of the season. 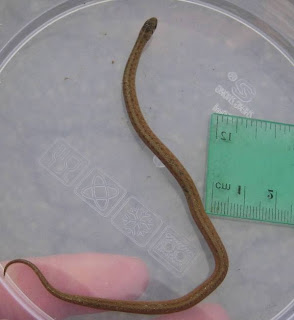 I found her under a cinder brick (please excuse some of the less pleasant detritus in the picture): 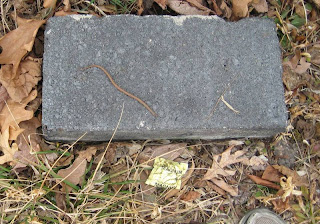 She was cool and stiff in the hand, like she'd been made of wire instead of supple snake, but she warmed up in my hand, and by the time I was done measuring and taking notes (for example note the black marks on her back - scars?) she had warmed up and was acting like a normal snake again.

The season is on, and I'm not entirely thrilled to say that. I'm mostly thrilled, but there's a little of me that is a little scared of all the inevitable frustration, the days I have to work in spite of the perfect conditions outside, the days that herping plans get scuttled when the weather forecast changes. All more reason I should quit my job and do nothing else but herping. Right?
Posted by Bernard Brown at 6:33 AM No comments: