I don't like driving far to go herping; I'm an inveterate localist. I try to stick within an hour range of home, but I'll stretch that for timber rattlers (Crotalus horridus). No other herp in our region has quite the same presence, the gravitas of a full grown velvet-tail.

I'm not greedy; I'll head to the hills for a glimpse at a one or two nice rattlers, sufficient to give me a pleasant buzz for the rest of the week, but last spring Scott and I stumbled into a scene we had only dreamed of. (I mean that literally - we both have very similar, repeating dreams of stumbling into piles of turtles or snakes, so many that we don't know what to do with all of them.) On that very real morning last May (2009), we were hiking towards a ledge on which I had seen a pregnant female basking the previous August (2008), scrambling and rock hopping over a talus field of large-appliance sized boulders when Scott pulled up short, his face seized by a mix of shock and wonder.

He was looking at a heap of timber rattlers, what I've since learned is colloquially called a 'pile up.' Here are a couple shots of the pile up, one from that first day (taken by Scott), another from a little later in the season: 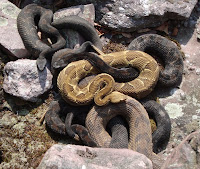 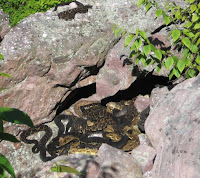 We had found a rookery site, where gravid female rattlers spend the spring and summer basking in the sun together. They don't eat much for that season; they just focus on keeping their body temperatures up.

In late summer the girls had their babies, giving us some beautiful images of baby rattlers cuddling with their mamas in the sun (the first one by Eitan):

Gravid female rattlers stick close to their hibernation dens (a.k.a. hibernacula - timber rattlers den communally, generally at the same spot year to year), and last fall I suspected that I had found the den site at which all these snakes spend the winter. Here is a shot of three rattlers cozily basking in the October sun, sort of arranged in an equilateral triangle - see if you can spot all three.

I made a quick trip in early April, which is early for finding rattlers. If you know exactly where the actual hole or crack in the ground inside of which they're shacking up, you can find them basking right there, but last fall I had only narrowed it down to the right talus slope, which had a whole lot holes and cracks in the ground. Here is a pic of a similar talus slope to give people a sense of the terrain (note that I'm really careful not to specify where we're going - our code name for the spot is "Forbidden Ridge," and that's about as specific as I'll get):

On the first of May I made a trip back out there, and I brought some friends so I could be sure I saw the rattlers if they were out there. My herping buddy Eitan (whose herping page is still the finest personal herping page on the web) drove me up, and at Forbidden Ridge we met up with two other herpers, Dave and Chris, rattler bloodhounds of sorts whom I've long admired, specialists in scouting good habitat and sniffing out the snakes.

We hoofed it up to the slope, I feeling a little nervous - organizer's jitters as the guy leading three other guys who had driven a long way to find the snakes I had told them were there. My anxiety peaked as we huddled at the base of the supposed den talus slope. I pointed to where I had seen the snakes in the fall, and we started up, ready to step slowly from rock to rock, looking and listening (not for rattling - that doesn't take much focus to notice - but for the rustling slide of a snake slipping back into a shadow.).

We didn't look long: "There's one," Chris matter of factly stated a few steps up the slope. I let out a deep breath, knowing the day wasn't a total waste. From there it only got better, with each of us seeing multiple snakes as we moved up the slope, more or less confirming that this was indeed where they spent the winter.

The sun was strong, which meant the snakes didn't need to expose themselves very much to warm up, making for very few decent poses (we did not touch the snakes to reposition them.), but here's a nice yellow-phase snake in full sun and full glory:

We saw a few clustered around a nice looking hole in the ground as well, making us wonder if this is THE spot:

We saw several more snakes at other spots, though all pretty spread out, giving us the sense that some had started dispersing to their summer hunting grounds and rookery spots. Here is one cozy black-phase snake:

... and not too far away, evidence of another exciting creature that roams that ridge:

We usually see piles of bear poop, but I guess this one left a little more behind.

I saw a lot of this:

That's Chris getting photos of a snake - time after time he'd call out another snake he'd found, leaving me to scramble up behind him to record the coordinates and get my own photo (I report the finds to the PA Herp Atlas Project).

I'll wind up with the last snake we saw. I was standing on a boulder, peering around and chatting with Dave and Chris who were spread out a few yards away, when I heard that little bit of rustling nearby. I looked down to see this guy tucked in between the rocks where I wouldn't have been able to see it from any other angle. 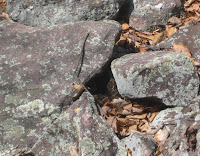 I've been telling Scott and Simon for years that I ought to dump a few snapping turtles (Chelydra serpentina) into the Centennial Lakes in Fairmont Park West, off Belmont Ave. On earlier trips Jen and I had seen a ton of bullfrogs (Rana caterbeiana), but more relevant to the snappers, we also had also seen lots of snails. I figured any muddy, smelly, trash-choked urban pond full of fat snails needs a snapping turtle, the perfect monster to drag itself through the mud and scare the local kids. It might even gobble up a few of the goslings too.

A couple weekends ago, Jen and I started at Lowes to get some gardening supplies. Then we flipped concrete chunks on Jefferson behind the Lowes (found one brown snake - Storeria dekayi - it got away), and then we hit the lakes. The lakes are a remnant of the great Centennial exhibition of 1876, when Philadelphia celebrated our nation's 100th birthday in grand style in the new Fairmont Park. Learn more about plans (as yet unfunded) to restore this potentially gorgeous stretch of Fairmont Park West to its former glory here.

The bullfrogs fled before us, as usual, splashing in just before we could get good looks at them, let alone photograph them (I'm really bad at spotting frogs before they move.). The herd of Canada geese ambled out of our way too, grumbling as they went.

Then I spotted a turtle. This one was basking on a rock in the middle, certainly not a snapper, and most likely a released red-eared slider (Trachemys scripta elegans). Without binoculars I couldn't be certain, so I decided to take a photograph I could then blow up on the computer and examine more closely. 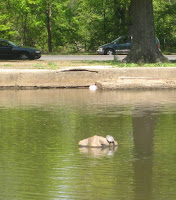 The plastron (belly) looked yellow to us, consistent with it being a slider, but I wanted a good look at its head to be sure. For the best angle for the photo, catching the head without shooting into the sun, I needed to get to the island in the middle of the lake. The water level was low enough on the west side of the lake for me to walk out (this is part of a restoration project), so we walked west along the sidewalk on the north side, working to where the exposed mud had hardened enough for me to cross without sinking in.

On our way along that north edge of the water, Jen pointed at the murky shallows a couple feet in and shouted that she saw a small turtle. I saw it too, though not quite well enough to ID it. I stepped in and grabbed, stirring up some of that mud and further obscuring the turtle, and just got a handle on the back of its 4-inch shell. Then it whipped its head, on the end of a surprisingly long neck, back at my hand in a snapper-style strike. I reflexively let go for a second (a cowardly failure I am loathe to admit). As the turtle ran into deeper water, I made the quick decision not to jump headlong into the foul storm water runoff and the mud - mostly goose poop plus whatever settles out of storm water runoff after having been rinsed off the streets of West Philly - and watched the little snapper get away.

Scott and Simon have both shot down my snapper-stocking idea repeatedly (I won't let it rest) - tinkering excessively with the herpetological order of the universe, they say. I suppose it's possible that there are snappers breeding in there already, but I doubt that adults would leave so many snails in there and no other signs of large snappers - namely tracks through the exposed mud. Someone else must have released the little one.

Feeling elated at the snapper discovery, but also a bit of a failure for not catching it AND scooped by whatever irresponsible pet owner who had released the turtle and unwittingly beat me to the punch, I continued to the island for my photo.

I got closer to the perfect vantage point but noticed two more geese that didn't look like they planned on getting out of my way.

I still had a few yards to go, but they weren't budging, just hissing obstinately and waving their heads up and down.

Here's the best shot I could get. I can just make out the red stripe on the head; it's a slider. 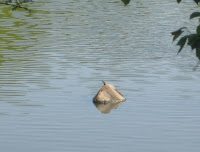 Posted by Bernard Brown at 4:38 AM No comments: