I’m home sick today and a little bummed out about it. I had a herping outing planned to the mountains but had to cancel it last night when my stomach bug showed no sign of letting up. I won’t go into too much detail about it, but let’s say it would have been a bad idea to be hiking around for seven or eight hours in the woods.

My digestive track might be out of whack, but I can still type, so I’ve taken advantage of this grounding to catch up on my herp atlas submissions. It’s a little tedious, but it’s important. There’s probably nothing wrong with herping just for kicks in moderation, but there is something wrong with herping just for kicks when your observations can serve larger conservation goals.

I did get out on the 4th of July, though to nowhere quite so dramatic as the mountains. Last week I noticed another cemetery on the map – this one just north of the Heinz Wildlife Refuge, and I thought I’d check it out. Jen came out too, but it wasn’t quite the cemetery I’d hoped for. I should feel ashamed of that. There is nothing wrong with a well-maintained cemetery with intact grave markers and grass free of dumped construction debris. Still, it didn’t promise much in the way of brown snakes.

We did head down into a creek bed that cuts through the cemetery. It is interesting how you enter a different world in those creek beds. There’s the wall of bushes and (most fun) briars at the margins, and the trees shut out the light once you break through. I can’t say I like it – something about all the mud, scrubby trees, stinging nettle, poison ivy, and briars turns me off, but we did see a green frog (Rana clamitans melanota - that's a chunk of Styrofoam next to it in case you were wondering) and caught glimpses/splashes of a few mystery frogs. 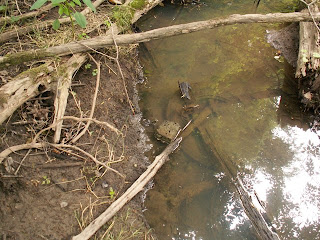 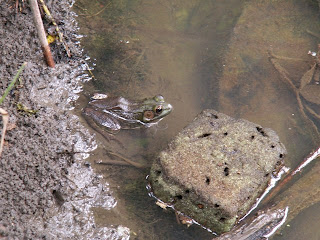 The other nice part of the trip was the blackberries. Jen might have gotten impatient with me stopping to pick each one I passed, but they were fabulous.

The weather was in the low 80s and cloudy when we went out in the early afternoon.

Posted by Bernard Brown at 2:49 PM No comments: