The wind almost blew me away last night. It was blowing at what had to be thirty miles per hour at least as we crisscrossed the shopping center parking lot, refueling on junk food after our fabulous amphibian herping outing on Sunday (March 8th). It helped that I was feeling particularly buoyant after the spotted salamanders (Ambystoma maculatum) we found at the end of the trip. They were such cool little creatures, and to find them at the end of a night and afternoon of not finding them was a perfect way to start the season; all the tension built up over the cabin-fevered winter months of scouting, researching, and fantasizing snapped in me, and I felt high the rest of the night.


We’ll start at the beginning with Cobbs Creek. I’ve written a lot lately about my plans for herping Cobbs Creek this year, and this past week I had a long conversation with a naturalist who spends a lot of time in our wild frontier with Delaware County. I learned a lot about what lives in the creek, what has lived in the creek, and the restoration work that has vastly improved the creek from how it was before I moved to Philly.

In particular I learned the history of the small marsh basin just south of the Environmental Education Center. This was first planned to be several small pools, but was then dug out into its current single basin. It was stocked with American toads (Bufo americanus – remember me wondering why there are no American toads in there? I guess I was wrong.) and spring peepers (Pseudacris crucifer). So, around three in the afternoon Jen and I headed over to the mini-marsh. The heavy rain had just stopped and the wind was picking up. The temps were still high (low 60s), and I was optimistic that we might hear something calling.

I was wrong on that count, but we did flip five redback salamanders (Plethodon cinereus) around the edge of the marsh. 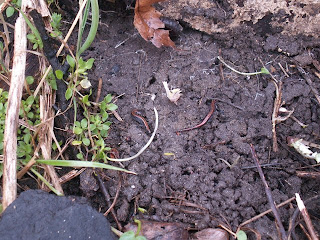 The creek was high and in fact had breached the basin, filling it up. Here's a shot of how high the water was in the creek. Hearing no frogs and seeing no frogs, we hopped in the car and called Scott. He had called me in the morning coming off an overnight shift. At that time he was a little incoherent. I caught about half of what he was mumbling before he hopped into bed, but one thing was clear: he wanted to go herping. So, figuring he had caught up on sleep, we called him and after a couple persuasive minutes on the phone with Jen (I was driving), he pulled his waders on and got ready to go.
The plan was to herp the woods and marshes in the mixed farm/exurban landscape of Chester, Berks, and Lancaster Counties. After about an hour we pulled off the Interstate and started picking our way through two-lane country roads.

The spring peepers greeted us at our first stop. It is certainly a thrill to hear them for the first time in the spring. Even if they were named something else (‘Mini Peepers’?) their choruses of sweet, high chirping would be the official theme music for the opening of the season. With the whistling and rushing of the wind around us as we walked into the woods, it was hard to make them out at first; from far away it’s the kind of sound you think you could be imagining, but they only grew louder as we started wading into the flooded portion of the forest.


I should stop here to make clear they were not greeting us. However beautiful I find their singing, and even though I interpret it as the announcement that spring is back, these frogs are calling out of acute lust and hard headed territorialism. Each frog is announcing his availability to females and claiming his wad of dry grass against the encroachments of his neighbors.


These guys are dead set on love and war, but they still pay enough attention to predators to shut up when they hear you coming. This can make for some pretty frustrating herping. You hear a peeper, you’re pretty sure he’s right over there about ten feet away, but just as you’re about to really fix on him, he shuts up. Locating individual calling frogs is best done with fellow herpers so that you can triangulate on the calling location, but I have yet to dedicate the time and effort to do this successfully (this will always be my excuse for failing to photograph peepers, no matter how much time and effort I dedicate.). The way to do it is to freeze and wait until he figures you’re an inanimate object and resumes calling. Then you all point at where you hear the noise, and the intersection of the lines to where each person is pointing is the location of the frog. We actually did try to pinpoint one peeper, but we lost patience at the freezing step in the plan. It was getting darker, we hadn’t seen any salamanders or evidence of salamanders in an hour of wading around, and we had two more locations to check.


Location number two was a bust. None of us had been there before, and although we could hear peepers, we couldn’t figure out where to park, so we skipped on to the third destination.


At this point I can’t say I held out much hope for finding spotted salamanders. This didn’t ruin my mood; I was feeling pretty warm and fuzzy about the spring peepers calling, but I figured this was yet another noble but relatively fruitless herping effort.


Have I mentioned how windy it was Saturday evening? When I was gassing up the car I was a little worried a gust would take my credit card out of my hand before I could swipe it. It proved windy enough to knock a tree across the road we planned on taking. Some locals were already hard at work on it with chainsaws, but we decided not to wait and circled around another way.


Finally we parked and headed downhill into the woods. Only Scott knew where he was going, and the darkness combined with the low temperatures (38 degrees – the temps didn’t drop; they plunged) and the brambles we couldn’t see until they tore into our arms and thighs (Jen got the worst of it since only Scott and I had hip waders) made for a grumpy, albeit short, hike to the pool.


Scott called out the first spotted salamander before I stepped into the water. It disappeared into the leaf litter at the bottom of the pond before I got a good look at it, but I saw my first a moment later.


I think sometimes we regard the animals we hunt too much as static objects, frightened creatures frozen in our hands. We snatch them up as soon as we see them because we’re afraid they’ll hide themselves before we can get a good look, but sometimes it’s worth the risk to watch our animals move around on their own, even in escape from us. Last summer I was awestruck by the grace of a garter snake swimming away from me across Cobbs Creek, undulating curves of black and yellow lines, a gliding crease in the surface tension of the water. On Saturday I was impressed by the slower fluidity of the salamanders. They don’t use their legs much in the water, but seem to get around by slowly bending back and forth in gentle sine curves through the leaves at the bottom of the pool.


Of course the low temperatures contributed something to that slow grace that impressed me so much. Cold blooded animals don’t move very fast at 38 degrees. In this way Jen enjoyed the cold temperatures more than Scott or I did. She’s always chasing after frogs and almost never actually catching them. There were wood frogs in that pool, and they were just too cold to get away. Jen could reach out and grab them, and they were still there when her hand hit the water. 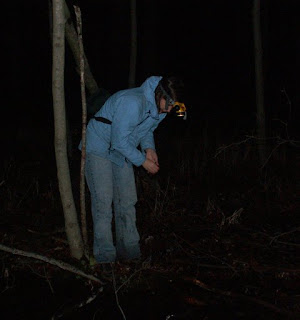 My camera has a hard time focusing in the dark, but note the frog floating in the flashlight's circle on the water. 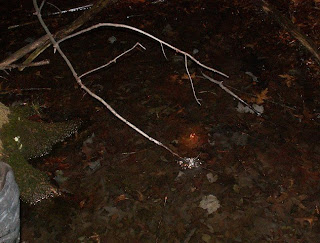 Here's a wood frog Scott caught. It was complaining the whole time he had it in his hand - chuckling out a soft version of their usual call. 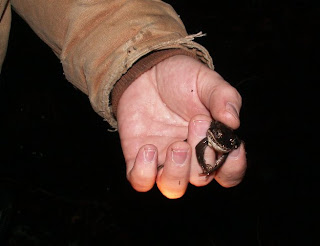 Here are some salamander pictures. Note the swollen area at the base of the tail; males' cloacas swell up in the breeding season. 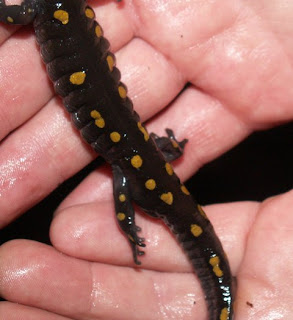 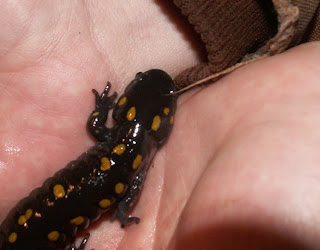 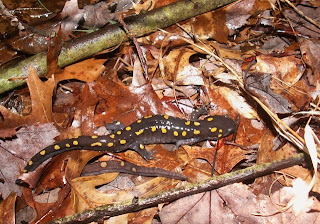 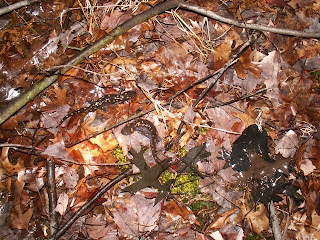 This one looked particularly wrinkly. 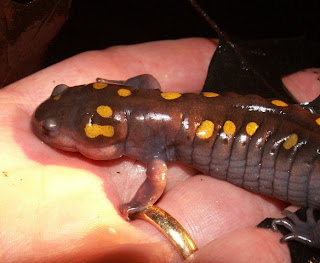 Eventually we figured we’d examined our share of salamanders and frogs. Our hands were in a lot of pain by that point. Somehow I left the net in the car, and it is not easy to keep your hand in near-freezing water, even if you’re grubbing around for a much-coveted salamander.

The drive back is a bit of a blur to me. Both Scott and Jen fell asleep (I was driving), but I was buoyed by the salamander high all the way back home. The season has begun.


Posted by Bernard Brown at 6:41 PM No comments: