I have a pretty high heat tolerance, but even I am sick of the incessant hot weather we've been having in the Delaware Valley. Most of the herps we look for stay well under cover (often deep under ground) during the day when it's up in the 90s and 100s, and with the sun waking up obscenely early this time of year, it hurts to try to dodge the heat by heading out at dawn.

What's left? Turtling! Some Philadelphians hit the swimming pools to stay cool. I head for the rivers.

In this case it's been the Delaware, the beautiful rocky portion upstream from Trenton. Maybe there are herps in the tidal section closer to home, but that stretch of the river scares me for swimming, and it's too murky to see anything in the water anyhow.

A couple weeks ago I headed to the Delaware with a buddy to look for my beloved map turtles (Graptemys geographica). These are river turtles native to the Susquehanna River system in PA, but that have become established in the Delaware system as well, apparently spreading out from a release point near Yardley, PA in the early 20th Century.

I have a blast looking for them. Turtles that drop into the water from a basking perch often head right to the bottom and try to hide among the rocks and other debris, so basically you put on a mask and snorkel and just search the bottom near where you've seen them basking.

We had seen a few big females (female map turtles are much bigger than the males - about 8 to 10 inches versus <6 for the males) basking, but we only turned up this one smallish male. Isn't he pretty? 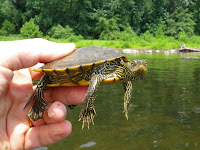 I'll show off with this next photo; I just got a submersible camera. I'm not much of a gadget person, but this thing does make aquatic herping a lot easier for me; I don't have to worry about getting it wet, of course, but more importantly I can take photos of critters where and when I find them rather than having to drag them back to a base on land where I've left a camera that I couldn't take in with me.

A few days later I decided to head back to the Delaware by way of a spot reputed to host spiny softshell turtles (Apalone spinifera). These are very funky looking turtles; as the name implies they have a leathery skin in place of other turtles' keratin shell. They also have a snorkel nose, making them look like a badly drawn, half melted version of the turtles we're more familiar with. They're also wary and very fast, so I was happy when I spotted one swimming on the other side of the creek, even though I was in no position to catch it at the moment, and even though none of the photos turned out. Here's one from the PA Fish and Boat Commission website:

I continued on in my travels (by bicycle - an ill advised long distance trip about four and a half times as far as my previous longest bicycle trip. I'm not sure what I was thinking, but my left ankle is still not happy about the whole thing) up along the Delaware by the towpath canal for a ways. I saw a lot of this:

That's a turtle swimming near the surface, maybe catching some rays, maybe keeping an eye on me.

I saw a lot of turtles basking. Here's a two-for, a small snapper (Chelydra serpentina, which are not avid baskers, making this somewhat interesting) sharing log space with a very young painted turtle (Chrysemys picta).

Here are a couple grown up painteds basking. 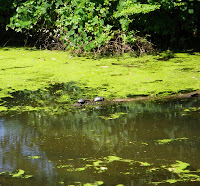 I also saw a red-eared slider (Trachemys scripta elegans, an invasive species in these parts), a redbelly turtle (Pseudemys rubriventris) with basking with most of her shell out of the water but her legs still in it, a stinkpot (a.k.a. musk turtle, Sternotherus oderatus), and what I think was a map turtle basking as well. I saw oodles of those map turtles on the river, crowded on almost every decent rock, it seemed. 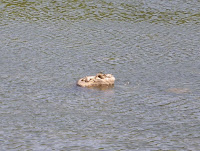 I managed to not catch any, but I had a nice time swimming around looking.

One last thing - I know these are birds, and common birds at that, but this scene was too cute to pass up: 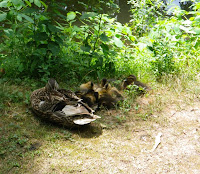