Sometimes it’s a little scary to organize a herping outing. There’s a chance it could be a memorable trip with lots of cool finds (we found five wood turtles!), or it could be a complete bust with nothing but millipedes and chipmunks. It’s like planning a party without knowing whether a band will show up, whether it might be a disk jockey instead, or whether there won’t be any music at all and all your guests will stand around blaming you for the time wasted.

On Saturday the 11th I had planned a herping outing for Scott, Simon, and Eitan (who produces this amazing herping site: http://www.eitangrunwald.com/herptrips/) and me. We had picked the date far in advance (dangerous for the middle of summer), and I got to pick the location. The way I had planned it, we would start in the morning in the hills and head for the water once the temperatures rose.

Since we were looking for timber rattlesnakes (Crotalus horridus) I’ll need to be vague, but it was in the mountains and valleys somewhere north of .

We drove to a verified rattlesnake site and split up. Eitan and Scott went one way, and Simon (the bionic hiker) and I went the other, down a rocky, southward-facing slope as the early morning sun was starting to warm the forest floor (temperature starting off in the high 60s).

Eitan had three of these nifty little walkie-talkies. They served the wonderful practical purpose of keeping us all in touch as we herped around, the two pairs a mile apart at least at points.

Simon and I did get a good workout heading down the slope, and then, of course, back up the slope, but saw no rattlers. Scott and Eitan didn’t see any either on their side of the mountain. We were beat when we got to the car, and as we were preparing to get back into it, I heard a green frog (Rana clamitans melanota) calling. We walked in the direction of the call. In a puddle we found a frog that dove when we got close, although it was a few yards in front of where we had heard the calling (which was apparently back in the trees a little). After finding next to nothing on our hikes (Eitan and Scott reported a redback salamander – Plethodon cinereus – and a wood frog, Rana sylvatica), all four of us were open to spending five minutes arguing back and forth about whether it was a green frog or a bull frog (Rana catesbeiana). We decided it was a bull frog.

So, with temperatures climbing into the mid-80s, we headed for water: a rocky creek bed with hills to one side and a broad, flat floodplain to the other side – great wood turtle (Glyptemys insculpta) habitat. This is where things got disturbing.

The trip to the water involved driving through a small town, and as we drove past a driveway to a house set back in the woods a little, we saw a young man standing next to an older man in a wheelchair. It seemed nothing remarkable; they could have been getting the newspaper for all we could tell at first, but as we passed them, we saw the young man was holding a rifle.

I twisted around and saw a large black snake at the edge of the trees next to them and called it out. That’s when Eitan put the car in reverse. As we got closer we saw it was a big, magnificent, shiny black rat snake (Elaphe o. obsoleta). When we got even closer we saw the rat snake’s head was missing and the blood dribbling from where it had been, and we realized what had happened.

That’s where I would have put the car back in drive and gotten the hell out of there. Eitan put the passenger side window down and said good morning. He asked whether they knew what kind of snake that was, and the guy with the rifle said it was a “black snake” that had been “getting a little too close to the house.” We had been hoping the guy had mistaken it for a rattlesnake and we could educate him about harmless snakes that eat pesky rodents around his house, but he stated it was not venomous, but he had killed it because it had been “getting too close to the house.”

I am proud of how we all maintained our composure. I know I wanted to shout the most vile things I could think of, and I worried Scott would jump out and take a swing with his new snake stick, but we all sat there and smiled uncomfortably as Eitan proceeded to ask about where one could find more snakes like that around there.

We all started the vile swearing once we were out of earshot. The brutal inanity of shooting a beautiful and harmless snake was more than we could comprehend. I love black rat snakes. I just might enjoy finding them more than I enjoy finding any other snake, as much as stating that might offend other herpers. A big black rat snake like that, maybe six feet long, is a magnificent beast to behold. And this guy didn’t just kill a harmless and beautiful snake, one of my favorite snakes, on the spur of the moment, say with a shovel he happened to have in his hand; he went and got his rifle and shot it! What was he scared of, that it was too formidable a foe to take on with a hand tool?

We eventually parked and walked downhill. Eitan lifted a rock next to a small brook running next to the trail and away scampered two longtailed salamanders (Eurycea longicaudata).

We split up again, Eitan walking along the hillside looking for more rat snakes, and the rest of us heading for the water to search for wood turtles. 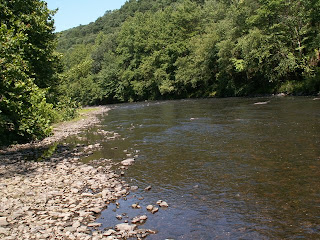 The herping was slow. Scott cut inland and hacked his way through the chest-high weeds and briars on the flood plain, Simon walked upstream along the bank, and I went downstream. Simon reported finding a toadlet (Bufo species), I think we all saw pickerel frogs (Rana palustris), but no turtles. 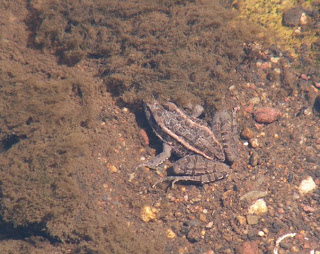 I did try a trip into their world. I was a little uneasy at first about the current, but I waded out and realized pretty quickly that I could swim against it, at least in that relatively slow section of the stream. Although I turned up no turtles, I did enjoy seeing some fish. Again with the fish! I know, this is a herping blog, but there is something cool about trout, previously just dark shapes in the water, turning broadside into beautiful creatures hovering a few feet away. I was able to determine that trout indeed can swim faster than I can. I thought I could give a strong kick and touch one, but however close I could get was still a safe distance for them. They could see and feel me coming, and with a quick flick of the tail took off.

I might have had a shot at the carp. I hadn’t figured on carp that far into the middle of the state, but as I swam over some of the deeper holes (10 ft?) I saw leg-sized fish swimming away below me (but no turtles).

We had one more stop in us, and we headed for a lake. Scott saw a large, unidentified turtle (I think a snapper – Chelydra serpentina) trudging through the water, and we all saw a few painted turtles (Chrysemys p. picta) and frogs – pickerel, bull, and green. The highlight of this part of the trip was a yearling painted turtle. I couldn’t even see what Scott was talking about, but when I handed him a net, he scooped out this little guy. It’s covered in mud, but you can get some sense of the beautiful pattern these have as youngsters. 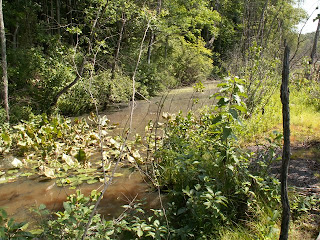 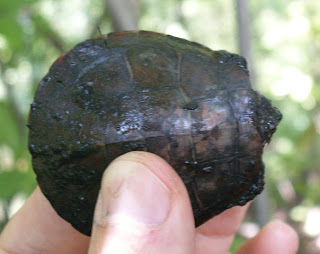 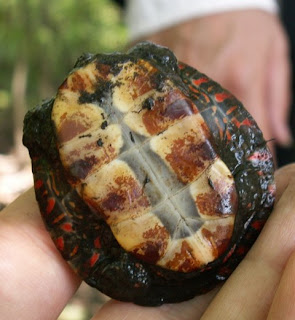 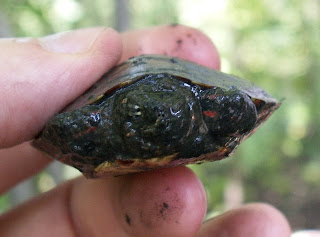 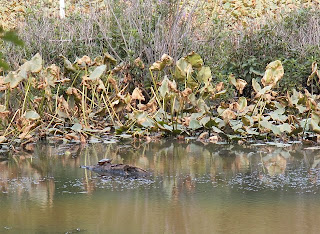 Posted by Bernard Brown at 6:45 PM No comments: