On the one hand I like to contest other herpers' end-of-the-season laments by declaring all the things you can still find into the end of October, and even November. On the other I feel that sense of panic, that sense of it all slipping away into winter and nothing you can do to hold it back, however badly you want to.

Even now, at the very beginning of November, I am still watching the weather forecasts for one more sunny day to get out and find snakes and maybe streamside salamanders, but I suspect the season for timber rattlers (Crotalus horridus) is over. Scott and I planned a big end-of-the-year trip to Forbidden Ridge a week and a half ago, figuring that it's about time for the snow and cold to drive everything out of sight, and even then we found surprisingly little.

The day was about right - temperatures in the low 60s (maybe not quite enough sun), but we wondered how the snowy weather and freezes the week before might have affected our scaly friends; would they still be basking in whatever sun they could find, or would they all have been driven too far underground to pop back to the surface to bask?

We can't say it wasn't a beautiful day. I know I say and write this a lot, but even a poor day of herping in the mountains is a good day hiking. 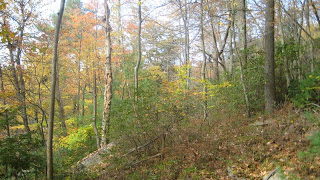 We were keeping our eyes peeled for big, meaty, badass adult rattlesnakes basking around a talus slope (rock slide on hillside) that I think is their winter den site, their 'hibernaculum.' When we showed up to the supposed hibernaculum, the heavy, damp clouds were keeping everything out of sight, but as the sun began to play hide-and-seek with us we heard dozens of little rustling noises around us from between the rocks. Any one of those rustlings could have been the tiniest breeze stirring a dead fallen leaf against its neighbor, and we reminded ourselves of that even as our instincts told us we were hearing snakes; if we were right about the snakes, we wanted to give them a moment to settle down before we moved towards them to avoid spooking them right back down in between the rocks.

Well, they weren't leaves; they were baby rattlers! Scott and I spotted a handful (four or five?) curled up on pads of leaves, enjoying the sun beams penetrating between the rocks. Baby rattlers spook easily, so we didn't get many photos, but I was still and patient enough to watch a couple of them crawl around.

This was a true thrill - I guess they figured I was yet another dead tree trunk standing up from the rocks, because they bumbled along with no apparent hurry or fear. I write 'bumble' because they moved with very little grace over the rocks, often having to retrace their path when they came up to a rock they couldn't scale, and sliding off clumsily when they lost the grip on smoother boulders.

Here's one picture I left relatively uncropped to show how well they blend in. Look along the bottom-left of the chunk of conglomerate for that mini rattler working along the rock's edge. 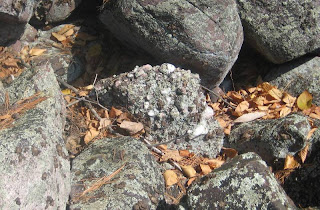 Here's another one, easier to spot sitting on another boulder. [this photo is not sitting well with Blogger.com - click on it for a better view]

We didn't see any of the bigger adults, leaving me unsure of my earlier certainty that I had found the hibernaculum. Maybe the adults were just deeper underground; maybe they were one talus slope over on the hillside. I guess we'll have to go back and check in the spring :-)
Posted by Bernard Brown at 1:13 AM No comments: