By now we’re all familiar with my love of brown snakes (Storeria dekayi). I’ve been having a good time catching them around West Philly and taking photos and notes as I go, but I haven’t been too systematic about it.

Lately I’ve started thinking more about what I could actually learn about the snakes I hunt for and ogle on a regular basis. About a year ago I was corresponding with a herpetologist about something else, and when I started asking about what is known about urban herp populations, I learned the answer is, not much.

Even more recently a couple people have remarked that some of my observations of brown snakes could be published. I don’t agree, but it’s been dawning on me that maybe I could learn something useful about these under-studied populations.

I guess there’s not much direct conservation value to studying brown snakes in an urban setting. Brown snakes aren’t endangered, so there’s no dire need for information on how to preserve them. Still they present some interesting population dynamics questions: they seem to be much more abundant than in wild populations, why? Most interesting to me, are we looking at one big population spread across West Philly (and presumably connecting with corridors out of the city along the Schuylkill and Delaware) or a patchwork of little populations, isolated from each other by roads and doomed to blink out one by one over the next hundred years or so.

So, I’ve been thinking I’d like to do a basic study on some of our brown snakes. I won’t get into all the gory details right now, but I’ve bought (and rigged up) the basic equipment and have managed to find a good place to do the study.

I managed to get out last Saturday (August 30th) for a morning and didn’t find any snakes (a little bit of a surprise), but I look forward to getting out again soon and getting started.

On other news, I flipped a garter snake (Thamnophis sirtalis) the next day (Sunday, August 31st) in the on my morning run. It was under a log that I’ve looked under a hundred times and never found anything but really big night crawlers and even bigger slugs. This time the slugs and the worms were there, but so was the ten inch garter, probably a yearling. I do wonder if it’s related to the big female I see in the same area.

I spent the past week on a herping vacation to . I think I’ll save it for the winter posts when I need to forget the snow and ice outside, but I’ll close with a teaser shot of me with what is surely the most awesome (there's no better word) kingsnake (Lampropeltis getula) I’ve ever seen. 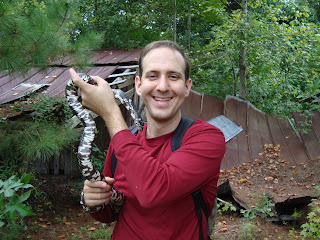 Posted by Bernard Brown at 5:53 PM No comments: