Fall is a bittersweet season for herpers. The summer doldrums break with the drop in temperatures that shifts reptile and amphibian activity back towards the surface and into daytime hours. Critters, after a summer of eating, reverse their spring migrations, now trekking back to their dens for the long winter hibernation. It’s wonderful to be able to find snakes again under surface cover or to see them crawling around in broad daylight again, but that hibernation part is the killer – we know the fun lasts only a few, hurried weeks, time to run around wondering if each glimpse of scaly beauty will be the last.

The arithmetic of months and weeks consumes more and more idle thought – two more weeks to mid-October and frosts in the mountains, then four more months to reliable herping again when the spotted salamanders (Ambystoma maculatum) and wood frogs (Rana sylvatica) move, with a possible break in a month and a half if this could possibly be the year I actually find breeding tiger salamanders (Ambystoma tigrinum).

This urgency pushed me into the mountains on Monday (September 29). I had had plans to go herping with Eitan on Sunday, but the weather took a turn for the cold and wet, no good for sun-loving timber rattlers (Crotalus horridus). On Monday I had to pick up my grandmother and her sister (Aunt Florence to me) at quarter-of-six to go to dinner at my parents’ house for Rosh Hashanah, but that left enough time for the dash north or northeast (sorry to be vague again, but such is life in a world with poachers) to a den site Eitan and I enjoyed (putting it mildly) this spring. Work has been light, so I called my boss Sunday night and got the day off.

The clouds were sending me mixed signals when I parked and started the hike to the spot a little before nine in the morning. The ceiling was gray and low in the sky, more damp flannel then fluffy cotton. With temps in the low 60s at that point, no respectable snake (I was targeting timbers, rat snakes – Pantherophis obsoleta, and copperheads – Agkistrodon contortrix) would be sitting out in the open. I did flip rocks here and there for what I think were simple dusky salamanders (Desmognathus fuscus), and I saw a newt (Nopthalmus viridiscens) swim away in a small pool of water. I also turned up some redbacks (Plethodon cinereus). I mentioned last week that these are a sign of fall, and luckily I’m not yet tired of them. They sure are cute – an impression that I try to suppress since I think that they’re a lot more graceful and beautifully colored than we give them credit for most of the time. Take a look. 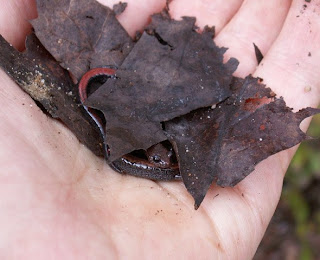 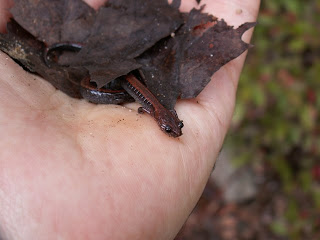 When I reached the vicinity of the den site, the clouds were still all wrong. A few teaser patches of blue let the sun through to warm my skin for a second, but they were quickly whisked away by the wind that seemed to favor the dense, cool clouds. I looked around for the particular pile of boulders that had been the hot spot in May, and I was surprised by how hard it was to find it. Thank God for GPS units.

I had planned to photograph snakes at the den and then hike off to check out more possible dens, but with the skies as they were, I decided to wait an hour. I laid back on an inclined slab and rested, watching the clouds float by and finally eating my PB&J for lunch.

At noon I gave up. If the weather was going to suck like that, at least I could get in some hiking. I hopped and hacked my way back to the main trail and started moving. Of course then the clouds finally blew away and the sun came out. I stopped to flip rocks that looked like they might be hiding smaller snakes but found only ants and crickets. I took a step towards this particular rock and leaned over to pick it up, but then took a startled, lurching jump back. See it? Focus on the dark spot in the leaves a little to the left of the rock. 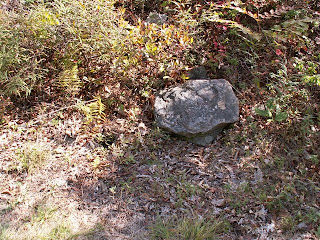 I had found my first rattler, a smallish adult coiled in the sun in the leaves. Here are a bunch more pictures – you can tell I really liked this snake. 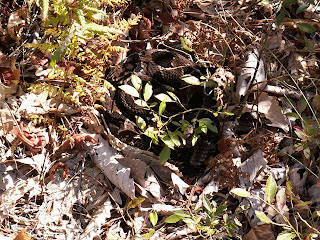 It sat still for me, and I really thought it wasn’t going to move at all, until I noticed that it had moved its head around to directly face me. You can see the shift in the next two photos: 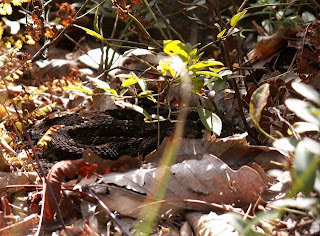 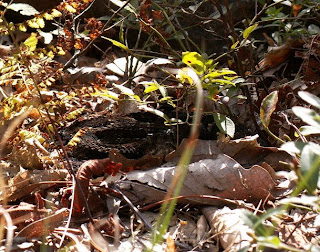 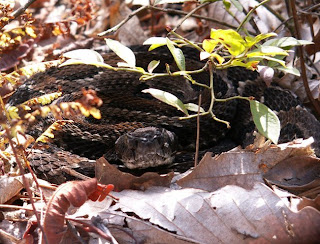 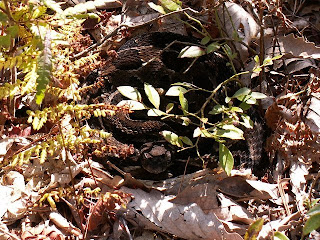 I eventually tore myself away and headed on up the trail. I was suddenly having a great time, but I still had to pick up my grandmother and great aunt at 5:45pm. Given the time it would take me to drive home (allowing time for possible tie-ups on the Schuylkill Expressway), shower, and drive to their place, I needed to be at my car by 2pm. I checked the time again and realized, much (very much) to my chagrin that I needed to turn back.

I passed that rattler again, and unfortunately the motion of me passing by a second time was enough to get it crawling on its way.

I cut off onto a different trail and started hiking about as fast as possible on rocky, uneven ground. I covered a lot of that ridgeline in about fifteen minutes and was nearing our favorite den when “BUZZ!!!!!!” I jumped back and shouted something like, “Holy $#@$&*% God!” because before me, hastily pulled back into a defensive posture, was a really big yellow rattler, and she was rattling her big, black, velvety tail off. She (I don’t know the sex for sure, but I’ll guess female for the sake of avoiding “it”) wasn’t running, though, so I took out my camera and started taking pictures. After about thirty seconds she stopped rattling, and then for another thirty she sat still, just ten feet in front of me to the right of the path. 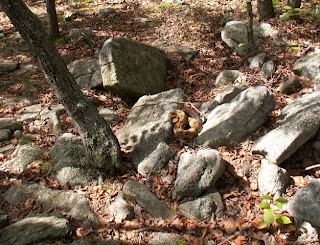 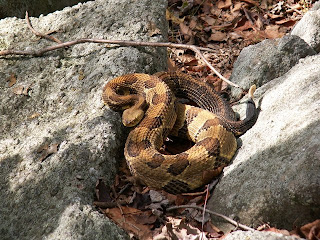 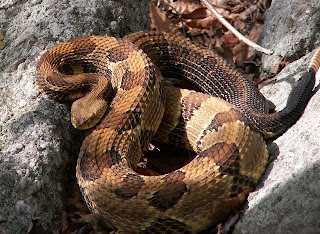 When she moved again, it was towards me. She extended her head, and then followed that to straighten out into a line and glide across the path at an angle that took her four feet away from my boots and down the slope to the other side. I really wasn’t expecting that; I’d been thinking she’d turn the other way and run, or at least take a little detour around me, but apparently she had somewhere to go, and as long as I was keeping still, I wasn’t a big enough threat to force her one foot off her original path.

Do you have any idea how strange that is? Snakes see humans and if they think they’ve been spotted, they get the hell away – all our reactions to the snakes we find are based on that fundamental rule. If we see a snake, we grab it so we can observe it before it flees. If we don’t grab it, we hope it’s betting on camouflage and we take pictures as we hold our breath, rushing because we know that at any second, that snake is going to hightail it into the bushes. The timber rattlers are different, and this blows my mind. They have their personal space, and if you stand quietly outside that personal space, they don’t really care.

This confident beast of a snake glided along with what looked like the absolute minimum of effort – not whipping around like a scared snake, but sliding over the leaves as if gravity was pulling her along even when she was going up over a slight rise in the hillside. 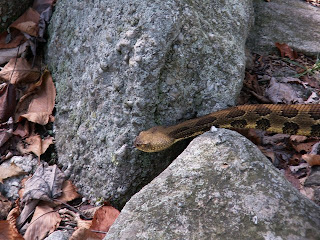 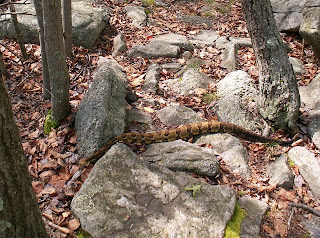 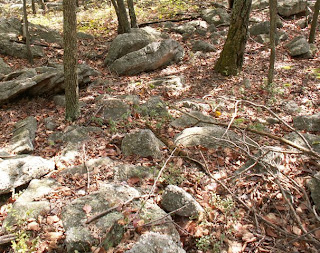 Also important is that she was heading away from the den that I know and towards where I suspect more dens to be – nice news for me, and I hope I can get back there again before it’s too cold to see where she might have ended up.

I saw no more snakes after that, but I did see a few little American toads (Bufo americanus). These guys are probably some of this year’s toadlets, which would mean they’ve more than doubled their size since they grew legs and hopped out of the water. 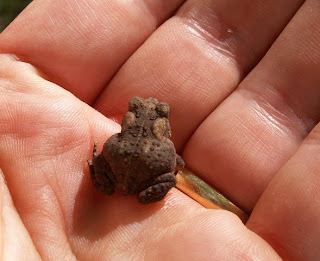 I did make it back to the car in record hiking time and picked up my grandmother and her sister on time. Have a Happy and Healthy New Year, and may it be full of big rattlesnakes.

PS – I submitted the rattlers’ information on the PA Herpetological Atlas Project website. If you see rattlers or anything else on their list, please make sure to submit the data too. This information is building a database on sensitive species so we can better understand how well they’re doing and spot declines before it’s too late. NJ has a similar project.