I went on a walk with my friend Tevin on Saturday. Tevin had injured his foot a couple weeks ago, so the Cobbs Creek 5k wasn't in the cards, but we headed down to the Cobbs Creek Community Environmental Education Center. There we ran into a friend, Dan, and one of the Junior Docents, Andy, ready with binoculars to take us out on a birding walk.

Now, I'm not above birding when it's for a good, educational cause, so we headed out to see what what we could see around the constructed wetlands at the mouth of Naylor's Run. On the way out we passed a young man with three kids, the three of them popping small snakes into soda bottles around a stump in a clearing, apparently a den where the garters (Thamnophis sirtalis) and browns (Storeria dekayi) had spent the winter.

We smiled pained smiles and kept on going, though I fumed. I like looking for snakes down there, and I've always been annoyed to see other people carting out snakes that I'd like to be finding myself. I'm even more annoyed that there are next to no turtles to be found in the stretch of creek around the Center, something I've attributed to the kids pulling them out too (something reported to me by the people who work there).

In full fairness though, I have caught snakes and taken them home. My friends have done the same; pretty much every herper alive took home critters as a kid and likely killed most of them through poor husbandry.

Moreover these are extremely common species. I can point to other spots along the creek where both are incredibly abundant, and from which they'll assuredly radiate back into any areas where they've been extirpated by little kids.

Tevin, Dan, Andy, and I kept going, and our mood was lightened by a Coopers Hawk sitting in a birch tree a few yards off the path.

When we came back, though, the collectors were still there, and proud to show off their snakes in bottles. 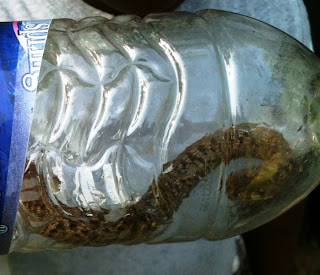 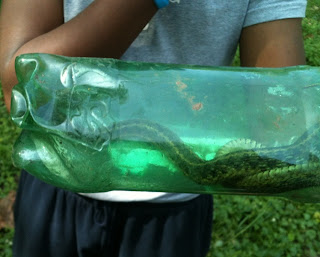 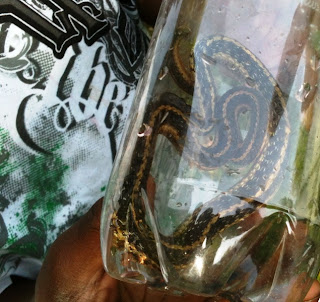 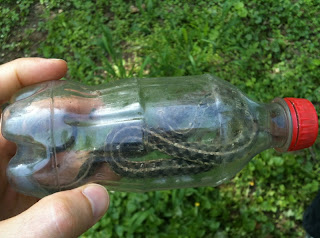 Including this large female: 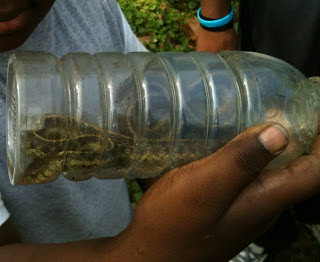 Still, I couldn't just leave them without saying something. So, I took the photos, congratulated them on the finds, shared my own love of snakes, and mentioned the blog (hi Mike!). Then I made three requests:

I have no idea if they did what I asked. They seemed amenable to my suggestions, and Tevin thought I had made a good case, but we didn't have time to stick around. We headed out and left them in the clearing, figuring we'd done the best we could. 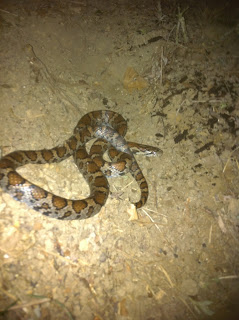 A friend in NW Philadelphia send me this photo over the weekend, asking what it was. I swore out loud and then IDed it as an adult milk snake (Lampropeltis triangulum). Of course there was no way I could receive a photo of a Philadelphia milk snake and stay at home. It's like pushing a button in my brain, like saying "Hey Ahab, what about that Moby Dick? Are you going to try to catch him again?" I couldn't go to where the snake was found - the property owners were away - but I could try some other spots.

And just as predictably, this time I found only redback salamanders. I didn't even find very many of them. The ground was incredibly dry, the usual moist humus of the forest floor powdery and kind of slippery to walk on. Now the question is will I be able to suppress the urge for another year, or will I waste more time on rocky hillsides finding no milk snakes in 2012. 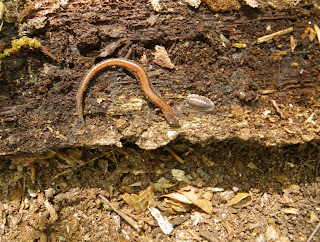 Posted by Bernard Brown at 7:49 PM No comments: