This week I got an envelope of shed snake skins in the mail. An Urban Sustainability Forum (a program of the Academy of Natural Sciences Center for Environmental Policy) contact had been telling me about the snakes that live in her garden in Northwest Philly, and she sent me some of the shed skins to identify. 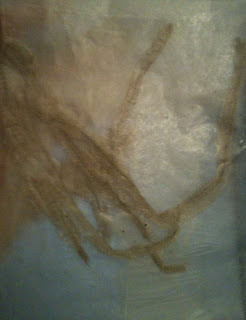 These are from brown snakes (Storeria dekayi) - the usual suspects throughout most of the City - but I liked how they arrived folded in wax paper. I'm half tempted to add some colorful dried maple leaves and iron the whole thing, which gets me thinking about why snake skins aren't used more often for arts and crafts projects.
Posted by Bernard Brown at 7:22 PM No comments:

This Sunday, as I walked from a turtling spot to my car, my six-year-old nephew Ezra got on the phone and told me about a snake he had seen on a nature walk in Connecticut. With deliberate precision he recounted that it had a dark stripe on each side, and a tan stripe down the back. It's tongue was bright red. It didn't even hiss; it just raised its head, looked at him, and slithered away. Then he explained that he was Harry Potter, at which point his three-year-old brother Simon hopped on the phone and explained that he was Ron and that my sister was Hermione, and soon the brothers were engaged in a fierce wizard duel while I tried to talk to my sister.

I told her it was a garter snake (Thamnophis sirtalis), much like one I had found the previous weekend. 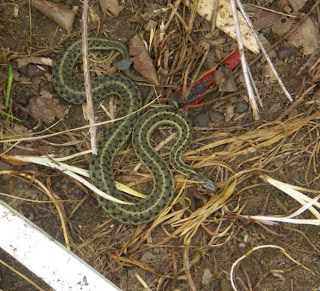 I found this snake in the Yeadon side of Mount Moriah Cemetery, a place that, if I go more than a month without visiting, the vegetation grows with such vigor that I don't recognize the place anymore, and I find myself a little intimidated by the vehemence with which nature reclaims a space once we turn our backs on it.

One of the disconcerting aspects of the overgrowth is that the various sections of the cemetery can be overtaken by distinct types of vegetation, as if the plants have staked out exclusive territories bounded by the paths, themselves claimed alternately by grass, red clover, and vetch. Some sections hide beneath a carpet of day lillies. Some are buried under a ten-foot mass of Japanese knotweed, and this one is getting overtaken by a thicket of sassafras. 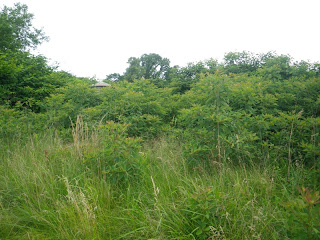 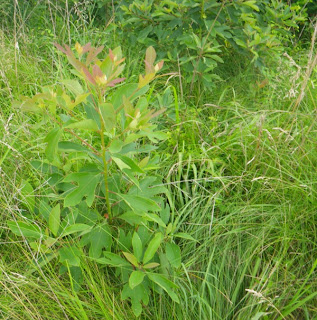 This is our future, folks. Someday, maybe hundreds or thousands of years in the future when we're either extinct or all living in giant plexiglass bubbles beneath the surface of the ocean, Philadelphia will look like the Mount Moriah Cemetery.
Posted by Bernard Brown at 7:15 PM No comments: