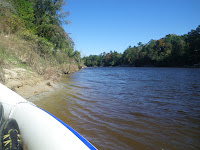 I apologize for another gap in the blog. I've been traveling again, driven by a turtling obsession to go South again. Now I'm back in the cooling Northeast. I have no herping trips to show for myself since I've been back. I would ordinarily save an account like this for the cold, hard, frozen winter, but with the season winding down, why not jump ahead of the schedule by a couple months.

Last weekend I found myself paddling upstream in a stretch of river in the Pascagoula system in southern Mississippi. I was by myself and had only one car, so if I wanted to check out a river, this was the only way to do it: fight upstream and cruise back down. In this case it certainly was a fight. The current wasn't terribly strong, but the wind was, and the two together gave me no breaks from paddling.

At some point early on I had to pee. I don't know if I really had to go all that badly or if it was a good excuse to take a break, but I headed for the bank to my left. For those unfamiliar with this sort of river, the banks generally alternate between (on the inside of curves) gentle slopes that often meet the river with enormous sandy beaches, and (on the outside of curves) steep, bluff-like banks cut sharply down through the sand and clay sediments. I was headed for the steep bank; it was closer, and there was a flatter lip that I could hop out onto.

This is what I saw as I drew closer: 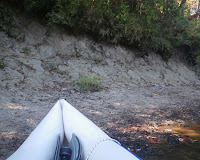 Yep, that's a frumpy little three-toes box turtle (Terrapene carolina) sitting at the base of the bank. Here she is in more detail. 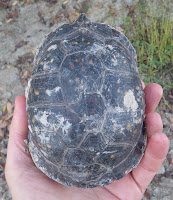 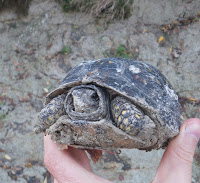 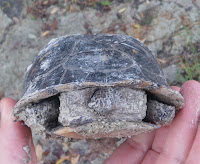 I regarded her as a sort of a post turtle. I suspected that she had no idea how to get out of that situation by herself, and I was powerfully tempted to help her out. I did suspect that she got there by herself, tumbling down the bank by accident or climbing down at an easier spot, and then getting a bit lost and stuck, similar to their problems with train tracks (box turtles sometimes climb into the space between the rails on train tracks and then can't get back out). Box turtles will dig down into the bottoms of puddles and marshy spots, and they will also burrow into leaf litter and other dead vegetation, but a steep bank next to the water? I saw nowhere she could go except into the water, and no easy way to get down there. True, box turtles are better climbers than we give them credit for (I've read about them climbing out of outdoor pens), but this was slippery stuff with a curled-over lip of moss and vegetation at the top, and I just didn't see her climbing out.

I contemplated a hook shot, an easy lob up and over, but that seemed a bit dangerous; I didn't want her landing on her back and unable to right herself. Down the bank maybe fifty yards there was a shallower slope to the bank. I decided to give her a ride in the Raftemys.

I should emphasize that I was not taking her very far. Box turtles are generally homebodies. Most spend their lives in an area about the size of a football field, and if you take them out of that area, they dedicate themselves to getting home. This is a problem when a well-meaning motorist finds a boxie crossing the road in their subdivision and decides to do it a favor by relocating it to a park a couple miles away. That box turtle will most likely start hiking in search of home, exhausting itself, not eating well, exposing itself to predators and car tires along the way. If it's lucky it makes it back to the same subdivision it was rescued from, and if it is unlucky it dies along the way. The lesson? Don't move a box turtle more than you need to in order to get it out of immediate harm's way. I figured the fifty yards or so (I'm terrible with distances, but it looked about half a football field away) might take her out of home range, but it would be close enough to find her way back.

Here she is in the boat with me. 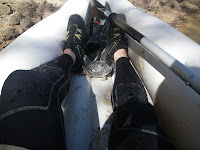 And here she is at farewell, trundling into the underbrush. 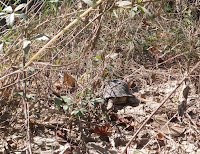 If I was right about her predicament, then I saved her life. If I was wrong, well, she had a day or two of hiking to get back to where she started.
Posted by Bernard Brown at 6:25 AM 4 comments: