On Saturday (Feb. 7th) Scott and I got around to doing something we've had planned for a while. I can't quite call it herping, since we weren't actually trying to find anything, but this is important stuff for high-level herping: laying boards.

We suffer through the winter up here in the Northeast (I have no sympathy for Southern herpers who complain about things "slowing down" in the winter) and we loathe every minute of it: about 161,000 minutes, by my calculations - 16 weeks x 7 days per week x 24 hours per day x 60 minutes per hour. Still, we shouldn't be spending all our time inside crying. Instead we should take our pent-up energy and do things that will allow us to maximize our herping once the world does thaw out again.

Number one is scouting, which I discussed on January 24th, but number two is laying boards. Anyone with at least a little herping experience knows the thrill of finding some really nice boards or sheets of roofing tin, and then finding some really exciting critters underneath. For the most part this is an unpredictable thrill, since we don't ourselves illegally dump debris on public land (right? right!), but if you have your own property or make arrangements with someone who owns some nice herping land, you can set up your own perfect board lines to check in the spring.

Board lines are a topic of much discussion in herping circles - what's the best material (boards vs. metal, carpet in some cases), what are the best arrangements (single layers vs. stacks) - and I won't go into all the possible board laying nuance here. For a good full discussion of board laying, check out Will Bird and "Kentucky" Phil Peak's Snake Hunting Guide. Even without thinking too much about it, some boards are better than no boards, so you should take this frozen time to get out there and improve your chances in the spring.

Once you start thinking about laying boards, you'll start paying a lot more attention to your neighbors' trash. Suddenly a stacked pile of carpet rolls make you think of the frogs that could be hiding under that carpet in just the right location. A dumpster full of plywood outside a house undergoing renovation isn't an eyesore anymore, it's a big chest full of gold at the end of the rainbow, if only you can figure out a way to transport it to where it can do some good.

Both Simon and Scott have been on the lookout for good boards lately, and together they put together the makings of a few board arrays. Scott and I picked up the boards early on Saturday morning (Simon was fighting a cold and decided not to come along) and drove out to some private land we were privileged to herp in 2008.

On the way there we passed a hardware store with a stack of plywood leaning on the side of the building. We asked if they had any plans for the boards (and in the process explained why we wanted it - always an interesting converation), but they had plans for the debris. Even though whatever they had planned had to be less cool than what we were thinking to do with the boards, we respected their rejection and didn't steal anything.

Once at the site I showed Scott a rocky upland area that reportedly hosts a copperhead (Agkistrodon contortrix) den. I don't think we'd have had much luck even if we had tried to find any: 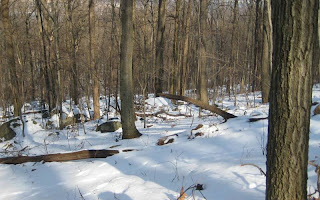 The landowner was doing some work on a building on the property, and although they had already burned most of the plywood when I checked in about our plans (I wanted to cry when I heard that), we were able to salvage some nice metal scrap pieces for our stack.

Ultimately we didn't get as many boards as we'd hoped to use, but I think we're off to a good start. Setting up good board lines is a long process. The boards have to sit long enough to settle in and look like part of the landscape, long enough to make it into critters' seasonal routines, and ideally long enough to attract prey species like mice and voles to nest underneath.

Here are some pictures of what we put out. First,, an upland site in an opening in the woods set conveniently between a corn field and marsh: 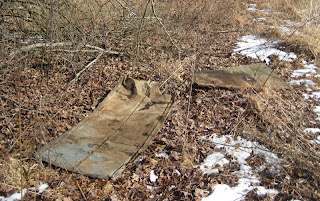 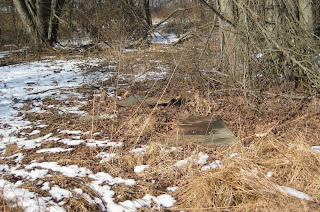 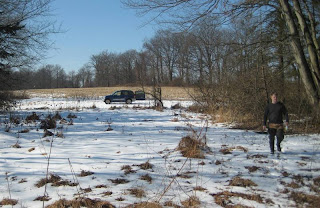 Next, a sunny spot at the edge of a field and the woods: 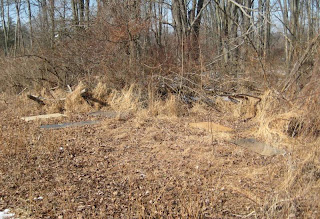 Posted by Bernard Brown at 10:43 AM No comments: