As an update to this post, here's the full official meeting notice:

The Greater Philadelphia Herpetological Society (GPHS) will present a free illustrated talk by Peter Warny of the New York State Museum, entitled Reptile Ecology and Conservation Projects Along the East Coast. The talk will be given on Friday, the 26th of September, at the Shriners’ Hospital, 3551 N. Broad Street (east side), between Venango and Tioga Streets, in Philadelphia. It will start at 8 PM, following a brief business meeting. Peter Warny will discuss herpetological conservation projects from over the past five years and environmental issues from Maine to Florida. Topics include prescribed burning, dam removal, and wetland mitigation, along with radio-tracking of several species of snakes and turtles. His extensive reptile research and conservation projects have involved him with the Nature Conservancy, National Audubon Society, and other conservation groups.

The GPHS is a group of both professional and amateur herpetologists dedicated to Conservation, Information, and Education. Membership is open to all people who agree with the aims of the society, provided that they live in the Greater Philadelphia Area. For this purpose, the Greater Philadelphia Area is defined as anything between latitudes 90° N and 90° S and between the Prime Meridian and the International Date Line.

Shriners' Hospital, 3551 N. Broad St. (East side between Venango & Tioga Streets). Park inside and identify yourself as going to the Greater PHS. Admission is free but we will be passing the hat to cover the speaker's honorarium and the "donation" to the hospital. The meeting is at 7:30.

I've emailed everyone I can think of about it, but I'm sure I've forgotten someone, and I'm sure there are plenty of herp-interested people in the area who read the blog but haven't contacted me. Please feel free to drop me an email (billysbrown[at]gmail[dot]com) if you have any questions about the Society or the meeting.
Posted by Bernard Brown at 3:17 PM No comments:

I've been traveling a lot lately and haven't had a heck of a lot of time for local herping (or for writing about herping), so I was glad to grab an hour on Wednesday to search for brown snakes (Storeria dekayi) at the Mill Creek Farm, an urban agriculture project at 49th and Brown in West Philly.

I've been looking for a brown snake population that's both accessible and safe from destructive development for my little study (see below for a post on the study), and the Mill Creek Farm is perfect. What makes it even better is that they already do a lot of programming with local school children, a component I hope to bring into the study in the near future. They've been incredibly accommodating and I owe them a huge thanks for the access they've granted me. The icing on the cake, to use a completely inappropriate metaphor, is the produce they grow and sell. Even if I don't find any snakes, I take home delicious tomatoes, peppers, eggplants, and whatever else I can't resist buying (luckily I'm limited by how much I can carry home on my bike).

I had looked once before and found no snakes, but on Wednesday afternoon I was finally able to get started. I uncovered three snakes: two under a board, and one under an old rug behind the bee hives. Working inches away from active bee hives with dozens of honeybees buzzing around me made me a little jittery. I know that honeybees are extremely docile and unlikely to sting unless harassed, but I still imagined myself tripping into one of the hives and pissing off a few thousand stinger-wielding bees. (of course I've also bought the honey - delicious) 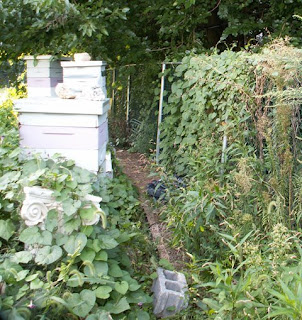 Once I caught the snakes I wrote down the basic information (temperature, time, coordinates, etc.) and took photos of the snakes, using a homemade squeeze box to keep them still and flat with a small ruler in the frame. At home I was able to use a computer program to come up with their lengths, a heck of a lot easier and probably less traumatic than trying to stretch a wriggling little snake out against a ruler. 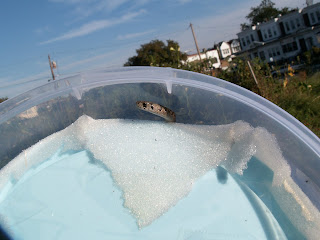 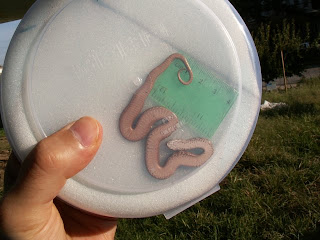 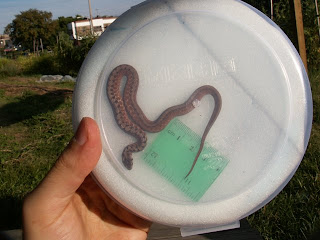 The part that was traumatic for the snakes was the marking. I'm using a small cautery pen to brand the scales under the tail - I scar a unique combination of scales on each snake so that I can easily ID them when they're caught again. Here's the article describing the basic method. It takes just a second and it doesn't hurt them in the long run, but I still wince when I hear the hiss and smell that little bit of burning keratin (like burning hair). 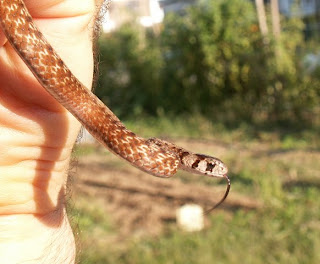 Posted by Bernard Brown at 5:00 AM No comments: