Our luck soured after the wonderful swim in the Pearl River system. We were repeatedly thwarted by muddy water. One nice creek in the Pascagoula system seemed just clear enough, but we saw few map turtles and were unable to find them once they jumped in. 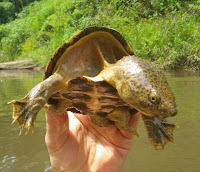 Scott doggedly pursued a nice-sized turtle that kept on the other side of a submerged log, like a squirrel running around a tree, only to realize it was a river cooter (P. concinnus) once he had it in hand.

We basically drove from Mississippi to Pennsylvania striking out in river after river all the way home. This is demoralizing stuff, showing up to rivers that didn't look too bad on maps and satellite images only to find them nearly opaque with the soil from the surrounding farms and pasture. What's so damn hard about vegetated buffers? Do we really need to graze or grow a few more rows of corn or soybeans all the way down to the edge of the water?

Our last river was one familiar to me, and, I'm happy to say, pretty much guaranteed to be clear enough to snorkel productively. 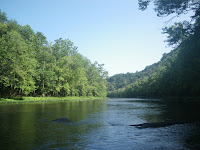 Unfortunately for Scott, after a night of sleeping in the car, after another day of driving absurdly long distances, his back started failing him.

So, I left him on the shore as I jumped in. We saw turtles before I had even drifted out of view. These are common map turtles (Graptemys geographica) - neither rare nor exotic, but beautiful just the same. One kept surfacing so that Scott, standing up the bank a bit, could see her just fine, but not so visible from my perspective. It was like playing whack-a-mole with two people. Scott would say 'over there,' and I would go over there, but she wasn't over there anymore; she was over there. Finally I found her hiding in plain sight on the bottom. 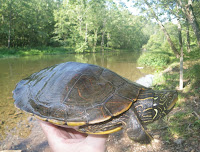 I left her with Scott to handle a bit before he let her go again as I drifted downstream.

Here is one of the incredibly abundant crayfish from the bottom of the river, facing down the big monster before inevitably bolting away to hide under a rock. 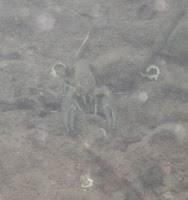 Here was the most-fun turtle find of the day. See that shell peeking out from under the boulder? 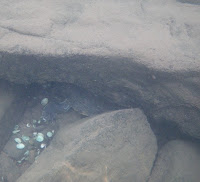 Two! This is one of my favorite photos of the trip. Once I get the touching/handling of the turtle out of my system, I do like to find and photograph them under water. 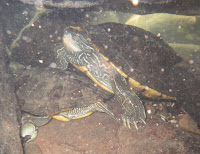 Of course I can't completely resist detaining one of them for a minute. 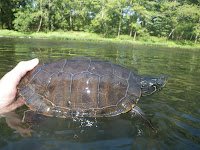 On our way out we saw a familiar sight, a box turtle (Terrapene carolina) crossing the road. 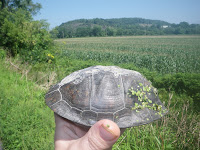 Apparently having just climbed out of this roadside ditch. 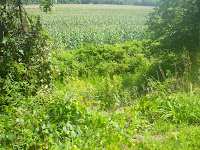 This might be the perfect way to end a long-distance turtling expedition. We consider box turtles to be a sign of the favor of the herping gods. A box turtle necessarily makes the trip. If you find a box turtle, even after days of fruitless turtling (based on God-knows how many hours of research and planning), the trip was still a success. After that morning of beautiful turtling in PA, capped with a box turtle, we were ready to head home.

Posted by Bernard Brown at 4:04 AM No comments: