The third time I found the worm snake (Carphophis amoenus amoenus) under the famous black rubber mat, I had come to release another. This was soon after when I learned that New Jersey has extremely restrictive wildlife collection laws (so, in a sense I am admitting a crime), and I went on a trip to put two snakes back where I had found them – one a worm snake I had found at my favorite WMA, and the other a gorgeous little southern ringneck snake (Diadophis punctatus punctatus) I had found near Avalon. Both had been doing okay but were not making the most satisfying captives. The worm snake, like all worm snakes, spent all its time under the dirt in its cage and was very difficult to handle – impossibly wriggly. The ringneck only wanted to eat salamanders, and I find it extremely unnerving and depressing to feed live salamanders to snakes. I’ll write more later about my love of salamanders, in particular the plethodontids. I probably could have switched the ringneck to worms with a few more weeks of effort, but not wanting to knowingly break the law at that point, I decided to release it 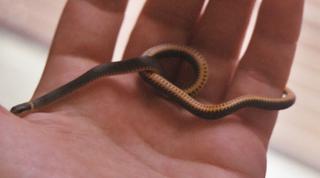 and maybe try later with another ringneck from elsewhere.

So, I found myself on a very strange, sort of reverse herping trip. Instead of wandering in the woods for hours, looking under hundreds of rocks, boards, and logs, never knowing if this next one would hide a treasure, I was starting with the treasures in hand, and heading directly for two precise locations in order to end up with nothing. This was a trip of failure – I had started the Spring with the idea to catch and keep in captivity several small, worm-eating snakes, and I had very nearly succeeded. I had found a beautiful little ringneck snake, and I had found a wormsnake. Then I had trouble feeding the one and found the other utterly boring. Then I had learned that the whole thing was against the law. This was my trip to undo it all and go back to the start again.

I drove down to the railroad tracks on the mainland near Avalon and walked briskly to the spot where I had found the ringneck. Letting it go was hard – I really like these guys, and while I know it will be easy to come by another, either captive bred or wild caught by myself or others, I did have second thoughts before I let go of it in the leaves and underbrush. There’s no turning back once you let it down on the ground. I’ve done it a few times – released small snakes that I had held for a short period of time. Each time it disappears so fast and so completely into the leaves or pile of rocks that you wonder how you ever find snakes at all in such an impossibly complex landscape. It had been so completely captive in the cage at home, and now it was gone among a nearly infinite number of hiding places – every crack, leaf, or stone on a forest floor blanketed with debris could hide it. There’s no getting it back in the hand. I walked back, egged along by deerflies, and feeling like some kind of criminal once I was exposed again along the road getting into my car.

At the WMA I headed across the fields and back into the woods. I let the worm snake go to disappear into the sandy soil next to its board, and then turned to walk straight back. I had been expecting to see nothing, but I decided to try the now-famous black rubber mat one more time, since I was walking past it anyhow. It was too hot and too late in the day to find a snake under cover this close to the surface, but the mat was right where it had been the last time, so I looked under it. I was shocked in a very superstitious way to find what looked like the same large worm snake. 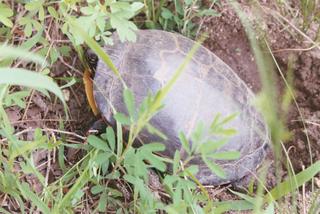 The other great discovery on that trip that was not supposed to hold any discoveries at all was this nesting painted turtle (Chrysemys picta ssp). I always thought these gals are supposed to lay their eggs at night and closer to water than this (50 yards?), but there she was, looking slightly uncomfortable and with her tail in a hole of her own digging. This is always a special find. Nesting is the female turtle’s great adventure. She spends her whole year in the water or near enough to it to jump in at the slightest hint of danger, but then once a year plods far past the safety of her pond, out along an open field where she is no match at all for any raccoon, coyote, or fox that could to flip her on her back. She sits there vulnerable and naked as she excavates a hole and deposits her hopes for immortality. I took a few photos and then left her to her task.
Posted by Bernard Brown at 7:31 PM 1 comment: