After our somewhat disappointing but at-the-same-time overwhelming marsh trip, I made Scott run us by the cemetery to look for my GPS unit. While I was packing that morning I hadn't been able to find it, and then I couldn't find it in my car either. That left the last place I'd used it as the logical place to check next, and that place was the cemetery.

It was not easy to get there. From our apartment at 46th and Spruce it seems like a quick shot, but starting from I-76 it's a little bit longer, especially when traffic is thick, half of all West Philly is double parked. and all the red lights are conspiring against you.

So, we get to the cemetery, I a little embarrassed, Scott doing a fine job of not kicking my ass for dragging him out there. It would be just plain silly to expect us to look for the GPS unit without flipping AC for brown snakes (Storeria dekayi).

We quickly turned up some yearlings (one of which is a lot bigger than the others now that I look at it - a big one or a year older?) 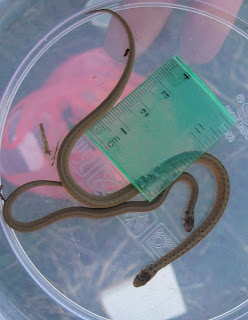 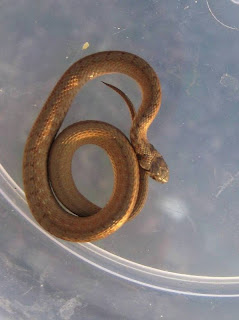 Then, under a completely ordinary asphalt roofing shingle, I discovered the most beautiful brown snake of ALL TIME!!! 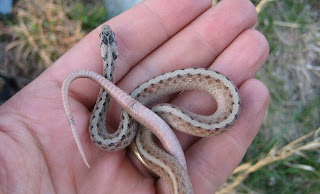 The brown snake fans out there will see what I'm talking about - that pale gray stripe set off from the tan sides by the sharp black double row of spots, the delicate black head markings - this girl is just plain gorgeous.

As for the brown snake nonbelievers who are wondering about what I'm talking about - all of you can go to hell. This snake rocks, and if you can't dig it, go read another blog.

(and then I found the GPS unit at the bottom of a bag we had actually had with us the whole time - I thought that was funny. Scott didn't agree).

Posted by Bernard Brown at 3:40 PM No comments:

Scott made a really depressing comment towards the end of our April 5th marsh herping trip. He remarked that we're too optimistic in the winter. Back in January, when we're sick to insanity of the cold, ice, and general dormancy of the herp world, we tend to look to April as the promised land (if a month can be a land), when spotted turtles will be tripping over themselves to walk in front of us and rat snakes will be dropping from the trees into our hands. The reality is that we get skunked pretty often, even in the bountiful spring weather of April.

If I'd had my potato rake with me I would have thrown it at Scott's head. Who needs a comment like that after a long, tiring day of fruitless herping? And on such a beautiful day! It's one thing to strike out, but it's much, much worse to strike out on a sunny April day with temps up into the low 60s - just about PERFECT for spotted turtles, and pretty damn good for a long list of toads, frogs, and snakes, almost none of which we actually saw.

Here's what we did see. I'll start with the most common and most basic, the beautiful painted turtles (Chrysemys picta) that always show up in the ponds, and that earn our disdain with their easy reliability. Sometimes I want to see how many skips I can manage with a good side-armed throw over the water, but so far I've resisted that urge. 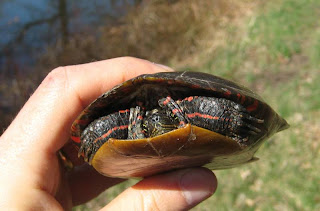 Next up, a red-spotted newt (Nopthalmus viridiscens). Newts are about as special and exciting as painted turtles, but I do really like the little guys. They're so easy to catch, and they're genuinely pretty in breeding season. 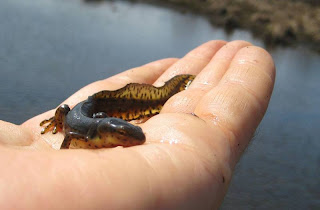 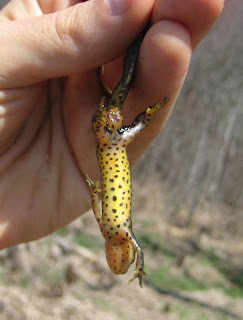 So, what I said right up there about their being easy to catch? That's probably true, but I still suck at it. I kept seeing newts in the shallow water in front of me JUST as they dove into the dead grass and muck, always one step ahead of the dull human. I didn't even catch this one that we found hovering at the edge of the creek - I tried a couple grabs and missed, and then Scott stepped in and actually caught it.

Scott also nabbed this beast of a snapper (Chelydra serpentina). It's about average size for an adult, and we found it towards the end of our trip, when we really did need some action, even if it was common snapping turtle action.

Scott hauled it out of the watery mud by its tail and back legs and plopped it up on slightly elevated mud. 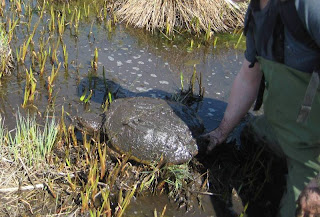 If you're planning on catching snappers, be aware that they don't just take that kind of treatment without complaint. This one hissed a little and then turned back to launch some snaps scarily close to Scott's crotch, even after Scott had let go of the snapper's tail and yelled "Hey now! That's enough!" 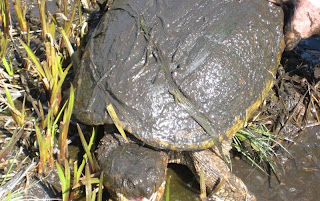 We were impressed with this snapper's moxy (not that snappers ever lack moxy), but we can't say the same for its intelligence. Snappers often flee not by swimming, exactly, but by diving into the mud and then quickly tunnelling beneath the mud to escape. It's an impressive feat to observe, that bulge in the mud receding into the distance like something in a Bugs Bunny cartoon.

This one chose to begin its under-mud escape in the middle of a patch of sedge, which struck me as a mistake. Of course I could be wrong; by the time we left it, it was deeper into the sedge than when it had started, and it might have been strong enough to rip down through the roots into the mud. 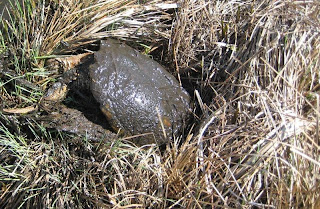 One thing we did accomplish while we were out there was to explore some gorgeous marsh habitats. "Marsh" might mean all one thing to a lot of people, but there's a lot of variety in there, from cattail marshes that are thick with the reeds and only a little soggy with water, to the lush, flowing edges of creeks, and to swaths of sedges with shallow, even sheet flow. 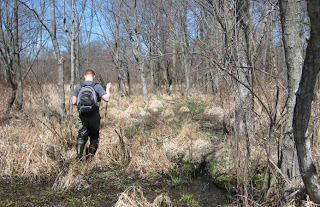 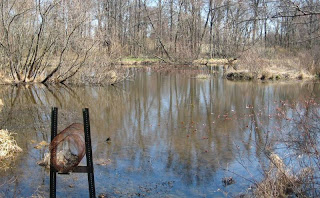 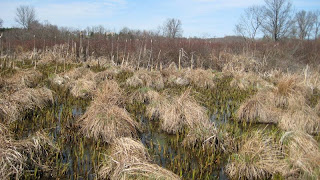 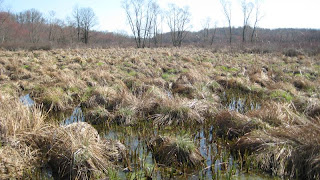 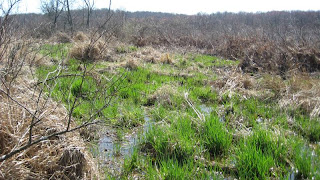 Even if it wasn't a perfect day, you can't walk away disappointed from a hike in such beautiful country, whatever your herping buddy says to piss you off.
Posted by Bernard Brown at 3:36 PM No comments: