Of course we all hate to see toads get squashed by tires, but this project has an important urban/suburban ecological dimension as well. Road mortality, as biologists tend to phrase it, is an important threat to reptile and amphibian populations nationwide. You see the effects (reduced populations) of a road for several hundred yards in either direction, and when you add that kind of buffer on either side of every road, you see most of our region's herpetafauna sapped by car traffic. This is one of the strongest arguments against sprawl for me. The more we leave our urban centers and stretch our suburbs out into the country, the more we build up our road networks and dice up habitat into unsustainable little chunks. Every time someone moves out to the woods (or the desert, or the shore...), he or she is adding another car that will kill a few more critters and contributing to the sprawl that will attract even more people.

Not all roads are equally damaging; a lot depends on how heavy the traffic is and how habitat is situated relative to the roads. The Upper Roxborough Reservoir has been out of use for decades and slowly turning into a wetland, perfect for toad breeding. The Schuylkill Center for Environmental Education and its expansive uplands woodlands property sits across Port Royal Rd., making for a classic road mortality arrangement - a road that must be crossed by the entire breeding population. To make things worse, some new housing subdivisions nearby have boosted the human population of the neighborhood and the traffic on that road.

Here's a shot of the reservoir and the surrounding terrain. Port Royal runs from northeast to southwest across the image, with the Schuylkill Environmental Center to the west and southwest of the ball fields:

Of course the migration isn't a single, simple event. The adults go from their woodland and backyard homes to the reservoir and then hop back home once they're done breeding. Their eggs hatch into tadpoles, and then the tadpoles grow little legs, absorb their tails, and set off into the big, scary world.

Port Royal Road is one of the first major obstacles for these toadlets, and last weekend I finally got to help the Toad Detour folks as we blocked off Port Royal again and kept an eye on the incredibly tiny metamorphs as they skittered over the pavement. 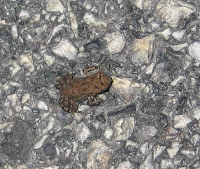 In some places it was hard to walk without stepping on them. You had to put your foot down very slowly to give them time to hop out of the way.

Even I was surprised at how darn tiny the little toads are. I took a couple shots with the usual herp photography size references to give you a sense of their size: 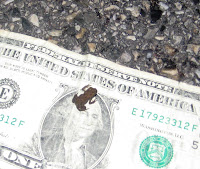 Other critters were moving too, namely some pickerel frogs (Rana palustris); unfortunately the only one I got to see was this unlucky frog: 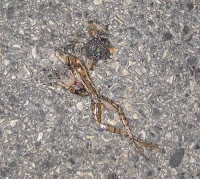 The Toad Detour folks still need volunteers. Also please feel free to drop me an email and I can get you connected to the volunteer coordinator.

My gosh, those are tiny toads. I think it is really cool that there is a group of volunteers who help ensure the toads' safe passage across the road.

Urban sprawl, habitat loss and habitat vivisection is such a tough problem. The human population in the US was about 307 million last year, and is projected to increase by about 50 million in the next 15 years. (Population Reference Bureau, prb.org) I live in one of those sprawling urban areas, and am so happy to live near an 800-acre nature preserve. As chopped-up as habitats are, I think that protected areas, like parks, preserves, and land trusts are the way to go.

Thanks - they are adorable. The volunteer effort has been great, both for the toads and as an enviro education effort.

I do like parks, but we'll see them lose terrestrial species little by little if they're cut off from other habitat.

On the population growth side, I'll toss out the somewhat controversial point that the number of people we have matters less than how we live. If we all lived in apartment buildings or at least modest townhouses/rowhouses, sprawl would not be a problem, even at 350 million. PA has had a roughly stable population but is sprawling nonetheless as people spread out in the suburbs/exurbs. Check out Green Metropolis for a nice book on the benefits of dense living.

I wonder how much the out-pond migration varies each year by weather. Last week we were watching the western toads come out of a cattle stockpond in coastal California, and this week the pond is surrounded by Pacific chorus frog metamorphs. In the last 2 years that we have been watching the pond, it dried up before many of the tadpoles got out.