I usually save vacation herping posts for the depths of winter, when the Delaware Valley will yield nothing to the hard-up herper, but somehow it's already spring amphibian migration time, and I still haven't posted the results of last July's family vacation (with my wife Jen's family) to the Florida panhandle.

The herpers reading this should be smiling and nodding knowingly - for the rest of the readers, the Florida panhandle, particularly the area around the Apalachicola River, may just be the best place to go herping in the entire country. Some will object and hold up southern Arizona or the Everglades, but the panhandle's mix of peninsular and Southeastern species puts it waaay up there.

As a guy who likes jumping into the water after turtles, though, I'll take the panhandle. The Everglades is a land of murky, shallow water, and Arizona's awesome rattlesnake diversity is countered by its dry climate and sadly limited turtle roster, which counts zero species of my favorites, the map turtles (Graptemys sp.).

Never mind that turtle build-up. I'm breaking the trip into two shorter posts, and this first one is about the terrestrial herping I did.

I am miffed to report that I had very recently messed up my ankle when we headed down to the Gulf Coast, so I was pretty much stuck road cruising from a car - my least favorite herping technique (though given the mid-summer timing of the trip, maybe the only productive one).

On the other hand, with most of my hopes pinned on aquatic herping, I had low hopes on land.

Early on, Jen and I took our niece Mariana with us to try out some roads that seemed to have some potential. I was wrong, and about all we found were southern toads (Bufo terrestris). 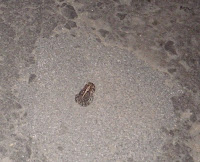 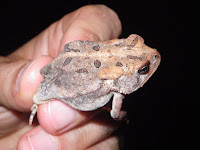 They were cute, but they weren't as cute as the snake I most wanted to find (in retrospect I have down-graded snakes I most wanted to find but did not find to a slightly lower status), the dusky pygmy rattlesnake (Sistrurus miliarius barbouri). To be fair, we have our own pygmies up in Pennsylvania, the rare and elusive massasauga (Sistrurus catenatus - note the genus is different than our timbers, of the much more speciose Crotalus; the Sistrurus are externally distinguished by larger scales on the tops of their heads) that linger in a few patches of wetland in western PA. The dusky pygmies are neither rare nor elusive, and on my first early morning road cruise I came up on this little cutie crossing a dirt road. 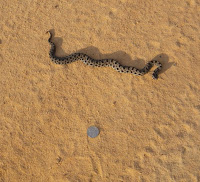 (The nickel in the shot is a herp photography standard, to show the size of something small with a coin for comparison - some folks have gotten baby snakes of smaller species to coil up on dimes for a neat effect) 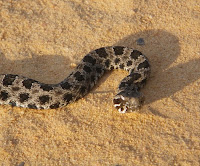 I am too poor or impatient a photographer to portray this snake's beautifully intricate and rich pattern of russet spots and black blotches outlined with just the narrowest white edging; 'dusky' is an unfair name for these guys.

Otherwise, morning herping (mixed in with scouting out spots to hop in the water) turned up a few box turtles (Terrapene carolina major). These were crossing the road in the humid, newly-sunny mornings, just like box turtles do up here. The Gulf Coast box turtles, with the apt subspecies handle, make up for their homely pattern with bulk - these guys looked freakishly large to my eyes. 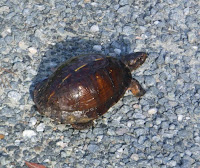 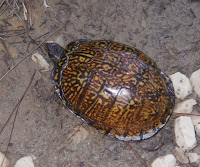 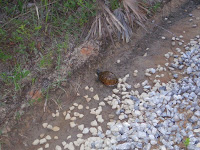 I only did one other night road cruising trip aside from the toad trip turned up some fun little critters (and more toads):

Here is a glass lizard (Ophisaurus ventralis), one of four species of Ophisaurus in the panhandle, which gave me fits comparing my photos to the descriptions, in particular because I failed to photograph the top of the lizard, where the presence or lack of a mid-dorsal stripe would have made the ID much easier. 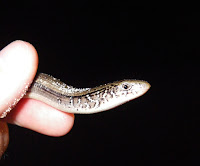 The only other live reptile (saw plenty of road jerky) I saw on land was this pretty little scarlet snake (Cemophora coccinae). 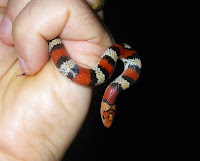 These guys are cooler than most herpers give them credit for. Everyone appreciates how pretty they are, but their diet and teeth set them apart. They specialize on reptile eggs - hence the pointy nose adapted to digging - and feature oddly blade-like teeth that help them cut through the leathery egg shells. Once they've got the egg open, they stick their heads in to drink out the contents.

Slicing teeth are rare in snakes, which generally swallow prey whole, and scarlets share them with a few other reptile egg specialists around the world, including the Asian kukri snakes (Oligodon sp.), named for the curved knife carried by Gurkhas.