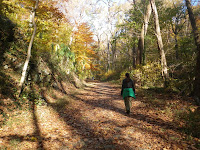 It is hard to suppress the impulse to catch. The quick transition from 'see critter' to 'grab critter' is something we drill into ourselves from childhood. I think it partly comes naturally; I mean that literally, that eons of predator evolution have included it in our basic toolbox of behaviors, but little herpers (and bigger herpers) dwell so much on the ones that got away - 'if only I had reacted faster when I saw that basking rat snake' - as punishment for herping failure that catching becomes second nature, something you don't think about as much as something you just do automatically.

To be clear, I am not going to give up catching critters. I am not a birder who can be satisfied with the simple visual stimulus. I need that tactile reward of the snake wrapping around my fist; the round, hard weight of a turtle; or the plump toad or frog filling my hand. Every now and then, however, it is nice to simply watch. 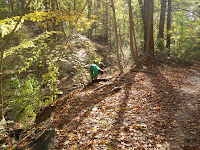 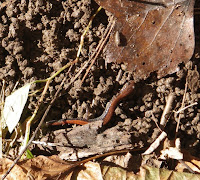 I continued on, examining hemlocks for evidence of woolly adelgid infestation. Jen stayed back, relaxing by the creek. She called a few minutes later: she had found a snake.

I turned and came back running. I assumed it was in her hand, pooping all over the place and scaring the nice walkers, joggers, and cyclists on Forbidden Drive.

No, the garter snake (Thamnophis sirtalis) was soaking up the sun on this crisp autumn day. I suppose I could have picked it up, but it looked so comfortable that I just left it there in the sun. 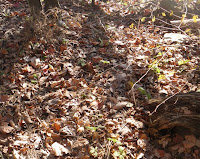 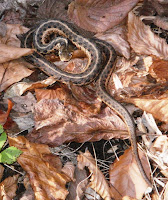 Posted by Bernard Brown at 2:12 PM

I know the feeling, it's often hard to resist catching an unusual snake or turtle. But, finding these things in the wild is such an unusual occurrence that it can be a good opportunity to observe some natural behavior...I would hate to catch a snake when it was about to eat something...now that I would like to see.